BRUSSELS – Explosions tore through the departure hall of Brussels airport on Tuesday morning killing up to 34 people and injuring over 100 others and a second blast struck a metro station in the capital shortly afterwards, the Belgian public broadcaster RTBF said.

The Belga agency said shots were fired and there were shouts in Arabic shortly before the blasts at the airport. Pictures on social media showed smoke rising from the terminal building through shattered windows and passengers running away down a slipway, some still hauling their bags.

The blasts at the airport and metro station occurred four days after the arrest in Brussels of a suspected participant in November militant attacks in Paris that killed 130 people. Belgian police had been on alert for any reprisal action.

“I could feel the building move. There was also dust and smoke as well… I went towards where the explosion came from and there were people coming out looking very dazed and shocked.”

“The thinking here is that it is some kind of terrorist attack – that hasn’t been verified by any of the authorities here at the airport.”

Video showed devastation inside the departure hall with ceiling tiles and glass scattered across the floor.

RTBF said the metro station hit by the explosion was close to European Union institutions. Authorities closed all metro stations in Brussels, but there were no details immediately available of any casualties in this second incident of the day.

A local journalist tweeted a photograph of a person lying covered in blood among smoke outside Maelbeek metro station, on the main Rue de la Loi avenue which connects central Brussels with the EU institutions.

The agency cited hospital sources as saying up to ten people were killed at the airport.

Belgian Prime Minister Charles Michel said on his twitter feed: “We are following the situation minute by minute. Our priority concern is for the victims and those present in the airport.”

Brussels airport said it had canceled all flights and the complex had been evacuated and trains to the airport had been stopped. Passengers were taken to coaches from the terminal that would remove them to a secure area.

Police did not give any confirmation of the cause of the blast. But there has been a high state of alert across western Europe for fear of militant attacks backed by Islamic State, which claimed responsibility for the Paris attack.

French citizen Salah Abdeslam, the prime surviving suspect for November’s Paris attacks on a stadium, cafes and a concert hall, was captured by Belgian police after a shootout on Friday.

Belgium’s Interior Minister, Jan Jambon, said on Monday the country was on high alert for a revenge attack. “We know that stopping one cell can … push others into action. We are aware of it in this case,” he told public radio.

French investigator Francois Molins told a news conference in Paris on Saturday that Abdeslam, a French citizen born and raised in Brussels, admitted to investigators he had wanted to blow himself up along with others at the Stade de France on the night of the attack claimed by Islamic State; but he later backed out. -Reuters 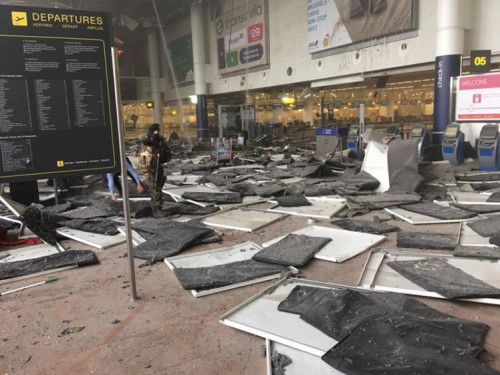