Facebook to enable safety check more in disasters after criticism 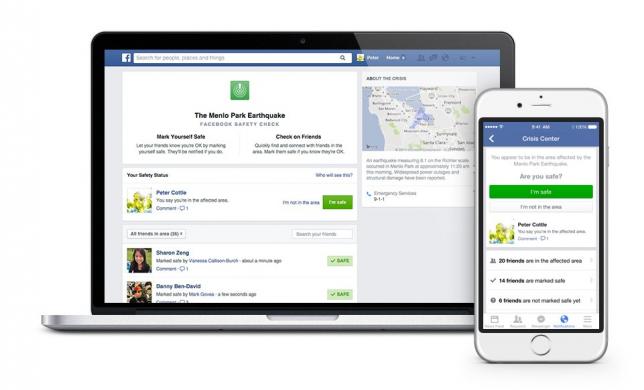 Facebook to enable safety check more in disasters after criticism

NEW YORK - Facebook Inc vowed on Monday to turn on its "Safety Check" feature more often during disasters in response to growing criticism that it only enabled the function after the attacks in Paris. In the wake of the deadliest attack on Europe in over a decade that killed at least 129 people and injured many more, millions of people used Facebook's Safety Check tool to tell their friends they were safe. But many users on the social media platform criticized Facebook for not mobilizing the same safety function during other attacks around the world, especially after suicide bombings in Beirut a day earlier that killed at least 43 people. Facebook's safety check feature was launched in October 2014. "Many people have rightfully asked why we turned on Safety Check for Paris but not for bombings in Beirut and other places," said Facebook Chief Executive Officer Mark Zuckerberg on his official account. "Until yesterday, our policy was only to activate Safety Check for natural disasters. We just changed this and now plan to activate Safety Check for more human disasters going forward as well." But many users were not satisfied with Zuckerberg's statement, accusing the social media platform for caring more about certain parts of the world. Facebook has also introduced a new feature letting users apply a French flag filter over their profile photo for a limited time in wake of the Paris attacks. TECH COMPANIES PAY PARIS TRIBUTE Online home-rental marketplace Airbnb Inc, which held its annual host convention in Paris a day before the attacks, activated its disaster relief program, enabling people displaced in Paris to stay with certain Airbnb hosts for free. Online retailer Amazon.com Inc and popular online community Reddit also displayed French flags on their homepages to pay tribute to the victims of the Paris attack. Telecom companies including Sprint Corp, T-Mobile and Verizon offered free calling and texting service between France and the US, while Google allowed free use of its "Hangout" unified communications service. -Reuters