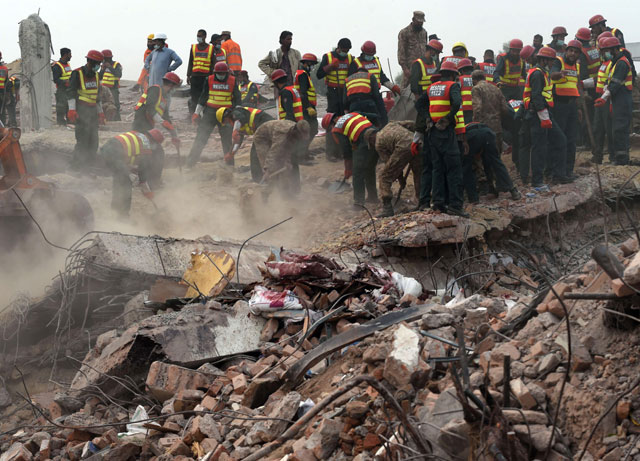 LAHORE (92 News) – The District Coordination Officer (DCO) Lahore Muhammad Usman has on Tuesday said that the search and rescue operation at the site of a factory collapse has been completed. The three-storey Polyester factory which manufactured polythene shopping bags came down suddenly six days ago killing dozens and trapping scores others. The rescue operation continued for six days at the site, in which army jawans have also participated in the rescue operation. Talking to media, the DCO Lahore said that at least 45 people were killed and 103 injured people were shifted to different hospitals during the 131 hour long operation. He said that army soldiers, 1122 teams from eight districts, police, Lahore Waste Management Company (LWMC), Capital Development Authority (CDA) and other rescue teams have participated in the operation. Muhammad Usman said that 96 officers and 2079 personnel, while 309 vehicles and heavy machinery participated in the search and rescue operation. “17,500 matric tonnes of debris was removed from the site of the collapse in the operation that continued for 131 hours,” he said. He said that now there were hardly any signs of anyone’s being still alive under the debris.