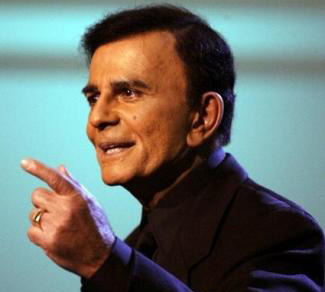 LOS ANGELES - The widow of US radio personality Casey Kasem has been sued by three of his children and his brother, who claim her actions led to his death in June 2014. The suit filed in Los Angeles Superior Court on Wednesday accuses Jean Kasem of elder abuse, inflicting emotional distress and breach of contract by restricting access to Kasem and failing to provide adequate medical care. Kasem, the former "American Top 40" deejay, died in Washington state at 82 after suffering from Lewy body disease, a form of dementia. His three children from his first marriage - Kerri, Michael and Julie Kasem - have accused Jean Kasem of abusing their father, who was suffering from bedsores at the end of his life, and preventing them from contacting him for a lengthy period. The lawsuit from the siblings and Kasem's brother, Mouner, seeks $250,000 for Kasem's suffering and unspecified other damages, including for economic losses. H. Michael Soroy, Jean Kasem's lawyer, did not immediately respond to a telephone call and email seeking comment. Los Angeles prosecutors said in May that Jean Kasem would not face criminal charges in connection with his death. They said there was not enough evidence to bring a case. At the peak of his career on "American Top 40," Casey Kasem was heard on more than 1,000 stations in 50 countries. He also voiced Shaggy in the TV cartoon series "Scooby Doo, Where Are You!" -Reuters