Fast-moving fires near Los Angeles force more than 40,000 to flee 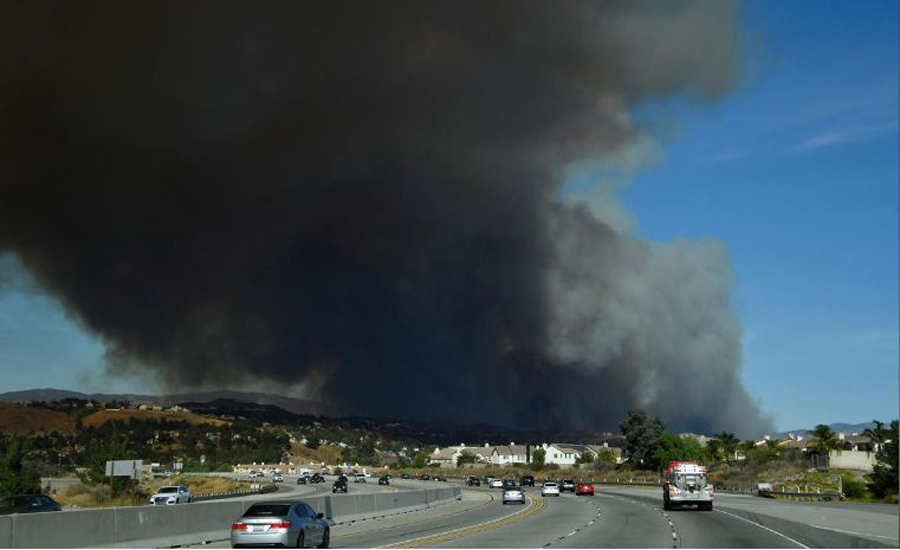 Fast-moving fires near Los Angeles force more than 40,000 to flee

GEYSERVILLE, Calif. (Reuters) - California firefighters on Friday sought to take advantage of a brief lull in high winds behind fast-moving wildfires that forced the evacuation of more than 40,000 residents north of Los Angeles and another 2,000 in the state’s wine country. With winds abating, crews worked overnight to battle a newly-started fire about 40 miles (64 km) north of Los Angeles that was threatening 10,000 homes and businesses, the Los Angeles County Fire Department said. Officials warned residents not to be deceived by the overnight lull, as the National Weather Service (NWS) forecast a pickup in hot, dry winds by Friday morning with gusts of 45 to 55 mph (72 to 89 kph) and temperatures above 90 degrees Fahrenheit (32 degrees Celsius). “Let’s not let our guard down,” said Los Angeles County Supervisor Kathryn Barger. She told a press conference 40,000 to 50,000 residents had been forced from homes by late Thursday with “numerous” structures destroyed. California’s wildfires generally erupt in the fall as hot, dry Santa Ana winds blow westward from the desert after a dry summer. Last year, at least 85 people died in one of the deadliest such fires, known as the Camp Fire in Butte County. The so-called Tick Fire, which began Thursday afternoon just outside the city of Santa Clarita, had consumed about 4,000 acres and was only 5 percent contained as of late Thursday, the county fire department said. Another burst of high winds was expected over the weekend, said Marc Chenard, a meteorologist with the NWS’s Weather Prediction Center in College Park, Maryland. To the north, where firefighters were battling a smattering of blazes, crews had restored power to most of the nearly 200,000 homes and businesses intentionally left in the dark because of risk of high winds downing electrical lines.

Power had been shut off to residents from the Sierra Foothills to the North Bay and San Mateo and Kern counties. But by early Friday, Pacific Gas and Electric Co (PG&E) said it restored power to most of its 178,000 customers in portions of 18 counties shut off, and it expected to have the rest reconnected by the end of the day. While the cause of the worst of the blazes, the Kincade Fire in Sonoma County, has not been determined, it appears to have erupted near the base of a damaged high-voltage transmission tower owned by PG&E. The company, a unit of bankrupt holding company PG&E Corp (PCG.N), said in an “electric safety incident” report to the California Public Utilities Commission that one of its power lines malfunctioned at about the time and in the location of the fire’s origin on Wednesday night. Neither PG&E nor the commission said whether the damaged tower or the malfunctioning transmission line attached to it were suspected of igniting the blaze, which has destroyed about a dozen homes and other structures. The California Department of Forestry and Fire Protection (Cal Fire) said it is investigating. It listed the same place and time of origin for the fire as the tower incident reported by PG&E. By early Friday, the Kincade fire had scorched about 16,000 acres and forced some 2,000 people to flee their homes, Cal Fire said. No injuries have been reported and only 800 acres had been contained, it said. Mandatory evacuations began with the 900 residents of historic Geyserville on Thursday, and continued climbing to 2,000 across Sonoma County through the day, the county sheriff’s office said. Geyserville and nearby Healdsburg, part of which was under an evacuation warning, are hubs of upscale restaurants, wine-tasting rooms, inns and shops surrounded by hills dotted with vineyards about 75 miles (120 km) north of San Francisco.