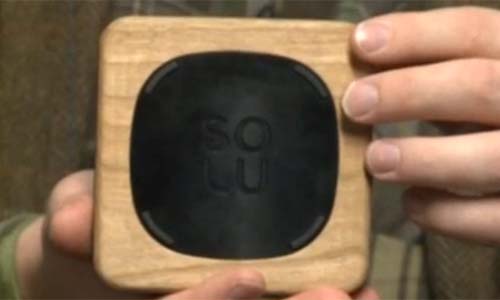 FINLAND – A Finnish company says it wants to change the computer world with this portable computing device. Described as the world's smallest general purpose PC, Solu is aiming to take on industry giants Apple and Microsoft. Their pocket-sized device, around 10cm squared and encased in wood, can be used standalone -- or connected to a screen and keyboard. Solu may be small, but its makers say it packs a powerful punch. Solu CEO, Kristoffer Lawson, says: "The hardware that's on the devices is high end. I mean we're talking high resolution screen, we're talking battery, we're talking a pretty good CPU, GPU. Premium material is made out of wood so the device price itself if you compare the price of an iPhone is actually pretty low, but the reason why people are so excited about this is that it is really the first no hassle sharing social collaborative computer out there. Solu's operating system is linked directly to a cloud service the team has built, thereby removing the need for maintenance, backups and installations. Solu's interface is also unusual and looks nothing like any computer you may have used before. Collaboration spaces are seen on screen as this series of bubble-like nodes. The idea, say its creators, is to base everything on users working together in an internet connected environment -- without traditional windows or menu bars. Kristoffer Lawson said: "Each one of these spaces is a separate environment where the team collaborates together, we work together and we share in this kind of space....So this is running now disconnected from the main screen so I can still use this as mobile device. It has its own battery, it has its own screen, so I can pretty much do everything that I could with the whole desk top environment." Solu has initially launched on Kickstarter at a price of 349 euros. The company aims to supply the devices direct to consumers from spring 2016. –Reuters