ISLAMABAD (92 News) – Special Assistant to Prime Minister on Information Firdous Ashiq Awan has termed the opposition a coterie of saboteurs.

Addressing a press conference on Friday, she said that yesterday’s failed protest had proved that the PML-N could not show power until having the power. “The prime minister has decided not to stop the meeting or rally of the opposition,” she said.

Criticizing the Pakistan People’s Party, Firdous Ashiq Awan said that dilapidated roads of Sehwan expose the failure of Sindh Chief Minister Syed Murad Ali Shah. “Bhutto is alive in Sindh, but no one is care for the poor masses,” she added.

The special assistant advised the opposition to come out of the politics of disruption. “Prime Minister Imran Khan has restored the dignity of the national flag across the world,” she said.

Firdous Ashiq Awan said that the PIA planes were diverted to Sukkur for 31 times to chant the slogan of ‘Bhutto is Alive’. “The nation has paid the price of former president’s ‘dahi bhalla’ in the form of Rs 270 million,” he maintained.

During a visit of shrine of Hazrat Qalandar Lal Shahbaz in Sehwan Sharif on Thursday night, Special Assistant to Prime Minister on Information Dr Firdous Ashiq Awan has said that Prime Minister Imran Khan is fighting for survival of the country.

She laid floral wreath on the grave of the great sufi saint. She offered Fateha and prayed for the progress and prosperity of the country. 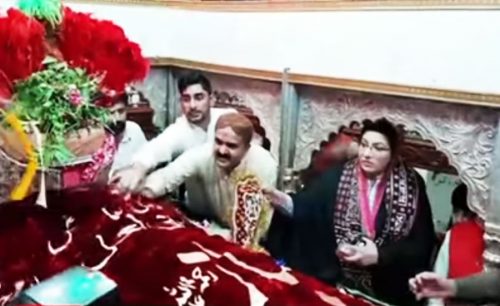 “I pray for guidance of opposition on standing the soil at Lal Qalandar shrine,” she said. “The wrongdoings of the dynasty rulers are not hidden from anyone, she added.

Firdous Ashiq Awan said the Sindh government was incompetent which deprived people from their basic rights, adding that acute shortage of clean drinking water and even unmet food requirements have brought lives of common people miserable terming their policies as anti-people.

The provincial president Pakistan Tehreek-e-Insaaf Sindh and parliamentary leader in Sindh Assembly Haleem Adil Shaikh and other party leaders were accompanied during the visit of Dr Firdous Ashiq Awan.