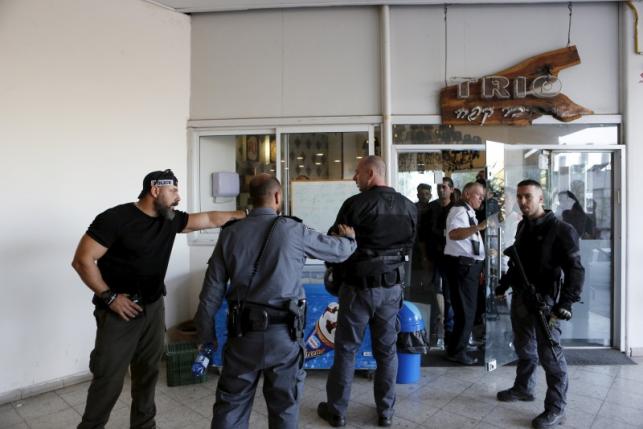 JERUSALEM - A Palestinian fatally stabbed two people in a Tel Aviv office building and three other people were killed in an attack in the occupied West Bank, Israeli police and the army said. In the latest attack near the Gush Etzion settlement bloc in the West Bank, a police commander said a Palestinian drove along the shoulder of the main road and shot at crawling traffic, killing three people and wounding others. Police spokesman Micky Rosenfeld said the attacker's car stopped when it hit another vehicle and the driver was seized. He said an American citizen was one of three people killed. The others were a Palestinian and an Israeli. At least seven other people were wounded, a medical source said. The attack brought to 18 the number of Israelis and others who have died, along with 80 Palestinians, in a wave of violence over the past seven weeks. The American was identified as Ezra Schwartz, 18, who was studying in Israel, according to a Facebook post by the American Jewish Committee. CBS's Boston affiliate said Schwartz was from Sharon, Massachusetts. In the Tel Aviv attack, a police spokeswoman said the assailant who had attacked worshippers gathered for afternoon prayers in a shop that sells Jewish religious items in the building was apprehended and a third person was wounded. Police say 49 of the 80 Palestinians killed in recent weeks died at the scene of attacks on Israelis and most of the rest died in violent protests in the occupied West Bank and near the Gaza border. Palestinian allegations that Israel was trying to alter the religious status quo at a Jerusalem holy site, known to Muslims as the Noble Sanctuary, where al-Aqsa mosque stands, and to Jews as Temple Mount, have partly fuelled the violence. Non-Muslim prayer is banned around al-Aqsa and Israel has said it will not change that. But more visits in recent years by Jewish religious activists and ultra-nationalist Israeli politicians to the complex, where two biblical temples once stood, have done little to convince the Palestinians. Earlier on Thursday, three 15-year-old Palestinian girls attempted to infiltrate an Israeli military post in the West Bank, the military said. Soldiers apprehended them, and the military said three knives were found in their possession. -Reuters