LAHORE/PESHAWAR (92 News) – The Provincial Disaster Management Authority (PDMA) of Punjab and Khyber Pakhtunkhwa issued flood alert for River Sutlej and Ravi after India opened waterways of two dams without any information to Pakistan.

PDMA Punjab issued a red alert due to rising water levels in River Sutlej. Additionally, the PDMA KP director general said that India had opened the outlets of Alchi dam unannounced which, he said could lead to a flooding situation in River Indus.

According to the PDMA Punjab, flood water between the range of 125,000 and 175,000 cusecs is expected to reach Ganda Singh Wala at 11am today.

The NDMA and PDMA have written letters to local authorities, urging them to stay alert and take precautionary measures to prevent loss of lives.

The administration should be ready to take emergency measures, wrote the NDMA in its letter. It has also alerted the authorities of the Gilgit-Baltistan Disaster Management Authority and district administrations of areas along the Indus River.

The PDMA has written to the deputy commissioners of Kohistan, Battagram, Tor Ghar, Mansehra, Abbotabad, Haripur, Nowshera and Dera Ismail Khan, informing them that on August 18 evening, India opened outlets of the Alchi Dam unannounced, which can also lead to a flood in the Indus River.

The water will take 12 hours to reach the Tarbela Dam and 15 to 18 to reach DI Khan, wrote the director general of the PDMA. The dam authorities at Tarbela have been instructed by the NDMA to regulate the inflow and discharge of water to prevent a flood.

The local administrations have been told to restrict boating and swimming and monitor the catchment areas along the Indus.

The Pakistan Meteorological Department (Met) has also issued a flood/weather advisory. According to the department, “very heavy to extremely heavy rainfall has been observed over the upper and lower catchments of Rivers Sutlej, Beas and Ravi during the last 72 hours”. 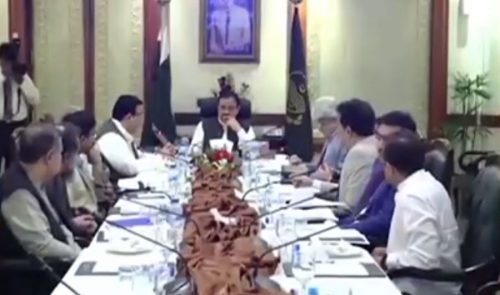 Punjab Chief Minister Usman Buzdar has summoned an emergency meeting to discuss the flood alert for River Sutlej. During the meeting, the situation will be discussed in detail including a focus on steps taken for relief work and the security arrangements made.

According to the CM Office, various officials including the provincial disaster management minister, provincial irrigation minister, a senior member of the Federal Board of Revenue, the inspector general of police, administrative officers and officials from relief organisations will participate in the meeting.

Deputy commissioners and commissioners from various areas including Sahiwal, Multan and Bahawalpur will also participate through a video link.

Deputy Indus Water Commissioner Shiraz Memon has said that India is continuously violating the Indus Waters Treaty and Indian government closed data sharing on water. He said that Indian authorities did not inform about opening water towards Pakistan.

Under the 1960 Indus Water Treaty, India has to preschedule its spillway openings. PM Narendra Modi’s government has decided to suspend meetings of the Indus Water Commission, which was formed to resolve disputes over water sharing.

Relations between Pakistan and India have been strained since India stripped Kashmiris of the special status they had for seven decades through a rushed presidential order on August 5.

Following this, Pakistan resolved to downgrade diplomatic relations with New Delhi and suspended all bilateral trade.

India practically suspended the Indus Waters Treaty over Kashmir issue and not informing before opening water towards Pakistan.