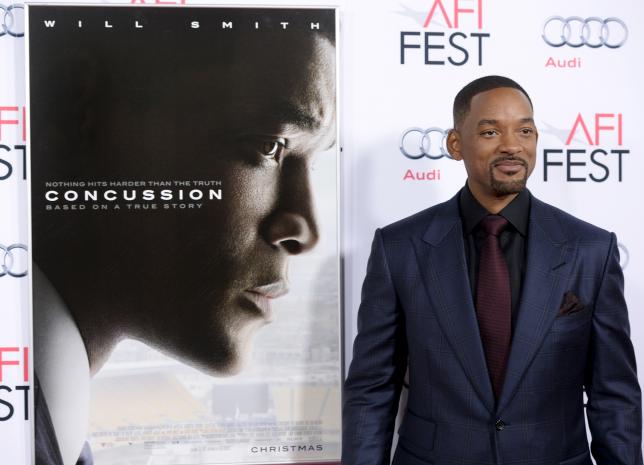 LOS ANGELES - Actor Will Smith, a self-described "football dad," said he felt conflicted about starring in the new film "Concussion" as the doctor who discovered brain trauma, a leading factor in the deaths of some former National Football League (NFL) players. Smith, who plays Dr. Bennet Omalu, the pathologist who a decade ago first linked brain damage to the deaths of men playing the most popular US sport, said he had not known the full dangers of the head injuries football players can suffer. "When I sat down to meet with Bennet, I was like, 'please say something to make me not take this movie, please,' and then I was just so compelled by the story and the fact that I didn't know," Smith told the audience at the film's premiere in Los Angeles on Tuesday. "I had watched my son play football for four years, and I didn't know. And just as a parent, I felt like I had to be a part of this." "Concussion," which opens in US theaters on Dec. 25, is based on Omalu's discovery and raising awareness of the degenerative brain disease chronic traumatic encephalopathy that can go undetected. The film links deaths of several football players to the condition, particularly that of Pittsburgh Steelers center Mike Webster. The NFL said Wednesday that it "welcomed any conversation" about the safety of the game and had implemented numerous rule changes and concussion protocols in recent years. "We are seeing measurable results, including a 34 percent decrease in concussions in NFL games since the 2012 season," a league spokesperson said in a statement regarding the film. "The game continues to change, and player health and safety remains our highest priority." "Concussion" is a hot-button issue for the NFL, which draws millions of viewers each week to its televised games. In April, the NFL settled a lawsuit brought by about 5,000 former players who accused the league of covering up the dangers of concussions. Omalu said he believed "Hollywood would be the most powerful and most important medium to portray the truth." In September, Sony Pictures Entertainment denied a New York Times report that the studio had altered the movie's script to avoid antagonizing the NFL. Writer-director Peter Landesman said the movie was not intended to be "confrontational or judgmental." "Everyone has a point of view and once you have the information for yourself, you're in the position to make a decision," Landesman said. -Reuters