For Myanmar's Muslims, little to cheer about historic election 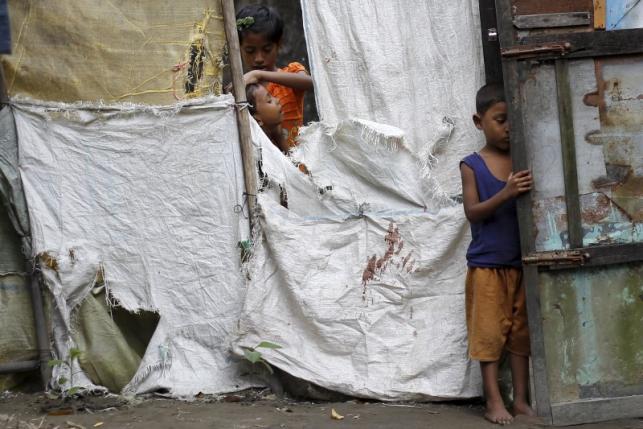 For Myanmar's Muslims, little to cheer about historic election

SITTWE, MYANMAR – In a refugee camp outside Myanmar's provincial capital Sittwe, Soe Hlaing was holding a pink card, the most coveted of the rainbow of documents indicating citizenship status, which gives him a vote in Sunday's historic election. But the 44-year-old Muslim said he will not be exercising the right, in protest against the disenfranchisement of most of the 1.1 million Rohingya Muslims amongst whom he lives. Soe Hlaing is a Kaman Muslim, not a Rohingya. The Kaman are one of Myanmar's recognized 135 ethnic groups and entitled to full citizenship rights by birth, unlike the persecuted Rohingya. But Soe Hlaing ended up in a refugee camp with mainly Rohingya during brutal anti-Muslim violence in 2012. Since entering the camp, the authorities have subjected him to the same restrictions on freedom of movement as his Rohingya neighbors. "Unless everyone can vote, I will not vote," he said, sitting outside his rattan home in the Ohn Daw Gyi camp on the outskirts of Sittwe. Even his wife, he said, was left off the camp's short voter list. As Myanmar heads to the polls on Nov. 8 the plight of its Muslim minority remains a blot on what is billed as the country's first free and fair election for 25 years. The opposition National League for Democracy (NLD) is widely expected to do well in the election, but the milestone for political reforms an NLD victory would represent will be lost on much of the Buddhist-majority country's Muslims. Radical Buddhist monks have stoked anti-Muslim tensions in the run-up to the election and the NLD is not fielding any Muslim candidates for fear of intimidation. There are very few Muslim candidates standing for any party, even though Muslims make up about five percent of the 51 million population. About 150 people are eligible to vote out of nearly 100,000 Muslims living in 20 camps surrounding Sittwe, the Rakhine capital, according to the state's election commission chair, Aung Myat. Some 2,000 Kaman, according to figures compiled by the United Nations, ended up trapped in refugee camps in Rakhine following anti-Muslim violence in 2012. There is no reliable figure for the Kaman population in Myanmar, but thousands live in Rakhine State. "It's a sad indictment of the widespread anti-Muslim sentiment that is not just aimed at the Rohingya," said David Mathieson, a senior researcher on Myanmar at Human Rights Watch in Yangon. DEEPLY DISAPPOINTED Many Rohingya held temporary citizenship documents known as white cards until February, when President Thein Sein abruptly announced the cards would be nullified. That stripped the Rohingya of the right to vote. Many Muslim candidates were also disqualified from standing as candidates this year. The Arakan National Party (ANP), a powerful organization of ethnic Rakhine Buddhists, maintains that Rohingya are illegal immigrants from Bangladesh, despite many living in Myanmar for generations. It led the successful lobbying of the national government to have them disenfranchised, to the dismay of the United Nations. "I am deeply disappointed by this effective disenfranchisement of the Rohingya and other minority communities," Secretary-General Ban Ki-moon has said. "Barring incumbent Rohingya parliamentarians from standing for re-election is particularly egregious." For many Rohingya who cast ballots in the past, losing their ability to vote is just the latest in the erosion of their basic rights. Exiting the camps or restricted villages in which they live, even to reach better equipped medical facilities, requires permission from authorities. "Our lives are destroyed," said Abdul Shakur, 41, a Rohingya who worked as a farmer outside Sittwe before being relocated to Ohn Daw Gyi and voted in the 1990 elections and in 2010. "How can our children live in this country freely?" Opposition leader Aung San Suu Kyi's NLD has steered clear of Sittwe and the refugee camps. She has said little about the contentious issues surrounding the lack of freedoms for the Kaman and Rohingya. Still, Soe Hlaing and others said, they hoped a government headed by the NLD might give them a chance to at least return home from the camp. "Before the violence we voted for the USDP (the ruling Union Solidarity and Development Party)," Soe Hlaing said. "But they haven't protected any of us." –Reuters