However, Swaraj excused from attending the ceremony in her tweets. 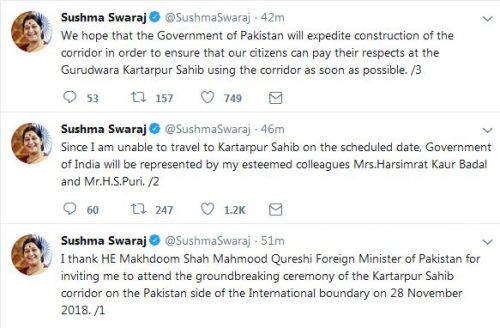 The foreign minister said that Prime Minister Imran Khan had offered India to join hands in the first speech after assuming his office.

Meanwhile, Indian Prime Minister Narendra Modi said that the proposed Kartarpur corridor between India and Pakistan will act as a bridge between the two nations. He was speaking at a function on the occasion of Guru Nanak Jayanti.

“Who thought that the Berlin Wall would fall? With the blessings of Guru Nanak Dev Ji, Kartarpur corridor can become a reason to connect people with each other,” he said.

Earlier, Indian Ministry of External Affairs had written a letter of thanks to the Pakistani High Commission for opening the Kartarpur corridor.