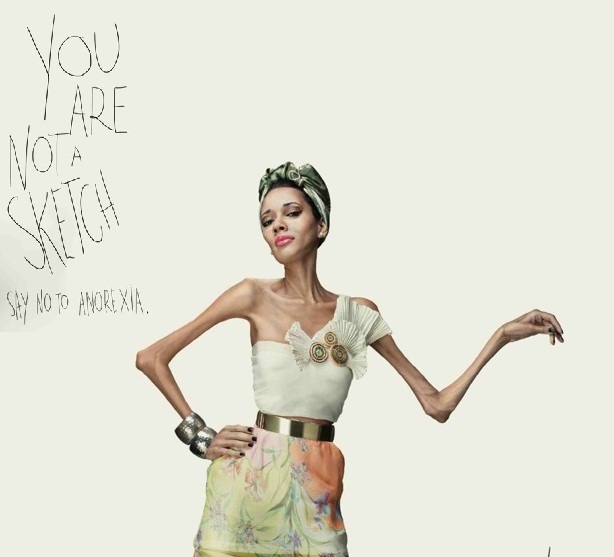 PARIS - France will ban excessively thin fashion models and expose modeling agents and the fashion houses that hire them to possible fines and even jail, under a new law passed on Friday. France, with its fashion and luxury industries worth tens of billions of euros, joins Italy, Spain and Israel which all adopted laws against too-thin models on catwalks or in advertising campaigns in early 2013. The measure is part of a wider crackdown on anorexia backed by President Francois Hollande's government. Lawmakers also approved a separate measure making it illegal to condone anorexia, a move targeting Internet sites that encourage dangerous weight loss. "The activity of model is banned for any person whose Body Mass Index (BMI) is lower than levels proposed by health authorities and decreed by the ministers of health and labor," the bill said. The lawmaker behind the bill previously said models would have to present a medical certificate showing a BMI of at least 18, about 55 kg (121 lb) for a height of 1.75 meters (5.7 feet), before being hired for a job and for a few weeks afterwards. The law, voted through the lower house of parliament early on Friday by Hollande's Socialist majority despite opposition by conservative parliamentarians, envisages imprisonment of up to six months and a fine of 75,000 euros ($82,000) for any agency contravening it. The second measure means that any website inciting a reader to "seek excessive thinness by encouraging eating restrictions for a prolonged period of time, resulting in risk of mortality or damage to health" will face up to a year in prison and fines up to 100,000 euros. Some 30,000-40,000 people in France suffer from anorexia, most of them teenagers, health experts estimate. In 2007, Isabelle Caro, an anorexic 28-year-old former French fashion model, died after posing for a photographic campaign to raise awareness about the illness. - Reuters