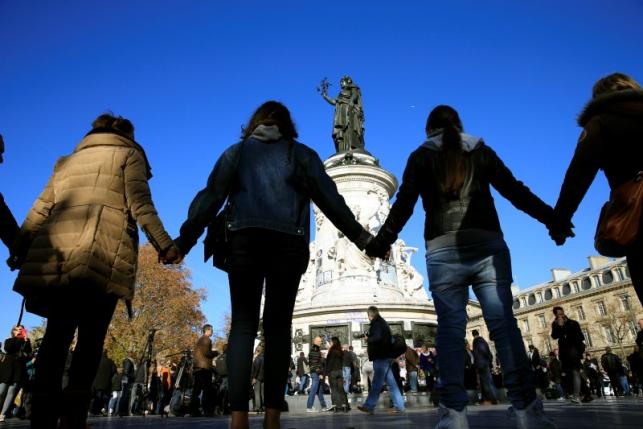 PARIS - Police questioned on Sunday the relatives of one of the suicide attackers who brought carnage to Paris on Friday, with France denouncing the strikes as an act of war and vowing to destroy the Islamic State in Syria and Iraq. Paris prosecutor Francois Molins told reporters that three jihadist cells staged co-ordinated hits at bars, a concert hall and soccer stadium killing 129 people and injuring 352, including 99 who were in a serious condition. Museums and theatres remained shuttered in Paris for a second day on Sunday, with hundreds of soldiers and police patrolling the streets and metro stations after French President Francois Hollande declared a state of emergency. Seven gunmen, all of whom were wearing suicide vests packed with explosives, died in the multiple assaults. The first to be identified was named as Ismael Omar Mostefai, a 29-year-old who lived in the city of Chartres, southwest of Paris. French media said he was French-born and of Algerian descent. Molins said the man had a security file for Islamist radicalisation, adding that he had a criminal record but had never spent time in jail. A judicial source said Mostefai's father and brother had been taken in for questioning, along with other people believed to be close to him. Another source said police had found a car in a suburb east of Paris that was believed to have been used in the assault, suggesting that at least one of the attackers had escaped. Prosecutors said the slaughter - claimed by Islamic State as revenge for French military action in Syria and Iraq - appeared to involve a multinational team with links to the Middle East, Belgium and possibly Germany as well as home-grown French roots. Greek officials said one and perhaps two of the assailants had passed through Greece in October from Turkey alongside Syrian refugees fleeing violence in their homeland. "We are at war. We have been hit by an act of war, organised methodically by a terrorist, jihadist army," Prime Minister Manuel Valls told TF1 television on Saturday night. "Because we are at war we will take exceptional measures. We will act and we will hit them. We will hit this enemy to destroy them, obviously in France and Europe ... but also in Syria and Iraq," he said. "We will win." France was the first European state to join US air strikes against Islamic State targets in Iraq in September 2014, while a year later it extended its air strikes to Syria. It had already scheduled to send an aircraft carrier to the region later this month. YOUNG VICTIMS The names of the first victims have started to filter out on social media, many of them young people who were out enjoying themselves on a Friday night. The dead included one US citizen, one Swede, one Briton, two Belgians, two Romanians and two Mexicans, their governments said. In the worst carnage, three gunmen systematically killed at least 89 people at a rock concert by an American band at the Bataclan theatre before detonating explosive belts as anti-terrorist commandos launched an assault. It was the deadliest attack in France since World War Two and the worst such assault in Europe since the Madrid train bombings of 2004, in which Islamists killed 191 people. Quoting an unnamed senior official, Israeli television said Israel's spy services saw a "clear operational link" between the Paris mayhem, suicide bombings in Beirut on Thursday, which killed 43, and the Oct. 31 downing of a Russian airliner in the Egyptian Sinai, where 224 people died. France had been on high alert since Islamist gunmen attacked the satirical weekly Charlie Hebdo and a kosher supermarket in January, killing 18 people. Those attacks briefly united France in defence of freedom of speech, with a mass demonstration of more than a million people. But that unity has since broken down, with far-right populist Marine Le Pen gaining on both mainstream parties by blaming France's security problems on immigration and Islam. If confirmed, the infiltration of militants into the flow of refugees to carry out attacks in Europe could have far-reaching political consequences. The attacks fuelled a debate raging in Europe about how to handle the influx of hundreds of thousands of refugees and other migrants propelled by civil war in Syria, Iraq and Libya. -Reuters