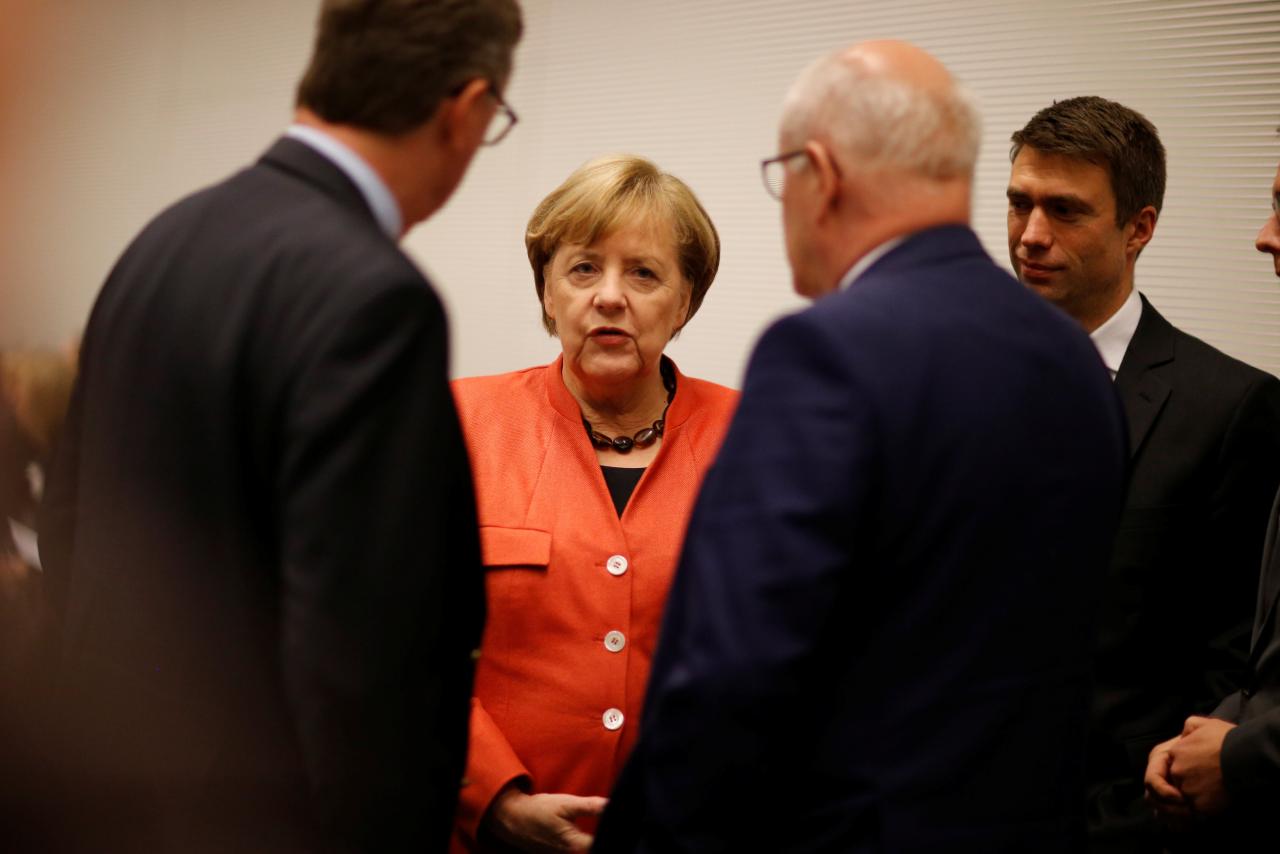 November 22, 2017
BERLIN (Reuters) - Two veteran allies of Chancellor Angela Merkel appealed to Germany’s parties on Tuesday to strike a compromise and form a stable government that could drag Europe’s biggest economy out of a political impasse.

The collapse of talks between Merkel’s conservative bloc, the pro-business Free Democrats (FDP) and environmentalist Greens has thrown Germany into political uncertainty and raised the prospect of new elections.

It has cast doubt over whether Merkel, Europe’s most powerful leader after 12 years in office, will serve a fourth term after her conservatives bled support to the far-right in a Sept. 24 election, though still won the most seats.

There are wider implications too for Europe since the collapse of talks means the euro zone’s ambitious plans for deeper economic integration could now be put on hold, euro zone officials said in Brussels on Tuesday.

Merkel’s former finance minister Wolfgang Schaeuble, now in the impartial role of parliamentary president, said compromise was the order of the day while chancellery chief Peter Altmaier gave parties three weeks to sort out the mess.

“We must be in a situation in the next three weeks where there is clarity about whether there can be a stable government on the basis of this election result,” Altmaier, also acting finance minister, told ZDF television.

Merkel has said she prefers new elections to an unstable minority government. Until a government is agreed, she continues as acting chancellor and previous ministers remain in post, while the newly-elected parliament also proceeds with business.

Pressure is growing on the Social Democrats (SPD) whose leader Martin Schulz has refused to contemplate re-entering a Merkel-led government after voters punished them for sharing power with her for the last four years.

Many in the SPD fear that another four-year term with Merkel, who is herself still popular, would mean their political suicide. Altmaier appealed to the SPD to reconsider: “Like ‘Made in Germany’, we are known for having a stable and reliable government ... we must give the SPD a chance to think.”

Andrea Nahles, head of the SPD’s parliamentary group reiterated that it did not want to prop up Merkel again. “We are not an emergency stop-gap for Merkel,” she said.

However, she also said the SPD would use talks with President Frank-Walter Steinmeier, who is meeting party leaders to explore possibilities to form a government, to find solutions, hinting at other possible options.

“We should talk about how we form a process that leads our country into a new, stable government,” Nahles said, adding this might be a minority government or new elections.

Steinmeier met FDP and Greens leaders on Tuesday, but they made no comment after the meetings.

One option could be an alliance between the conservatives and Greens, who built up a certain level of trust during the exploratory talks, which could be ‘tolerated’ by the SPD. That could guarantee some government policies get through parliament.

Michael Kellner, a top Greens negotiator, said it was up to Merkel’s party to propose such a minority government, but did not rule it out as an option.

In a sign that compromise is still possible, Merkel’s Christian Democrats, FDP and Greens voted together on a motion in parliament on Tuesday to create the conditions for Ireland to pay back debts early to the International Monetary Fund (IMF).

One former SPD leader Bjoern Engholm said the SPD should rethink their ‘no’ to a grand coalition, but he said any such alliance would only be possible without Merkel.

Many commentators think the far-right Alternative for Germany (AfD) stand to gain most from new elections although polls show no big differences from the September results.

Due to a protracted procedure designed to avoid repeated elections, a new vote would take months to organise, raising worries that European reform efforts will be held up. “Europe needs a Germany that is capable of acting,” said Schaeuble. “The reactions from abroad show that Europe and many other countries in the world are waiting for us.” He said it was important for parties to compromise to avert a crisis, saying this did not mean parties had to ditch their principles. “The task is huge, but it’s not unsolvable.”