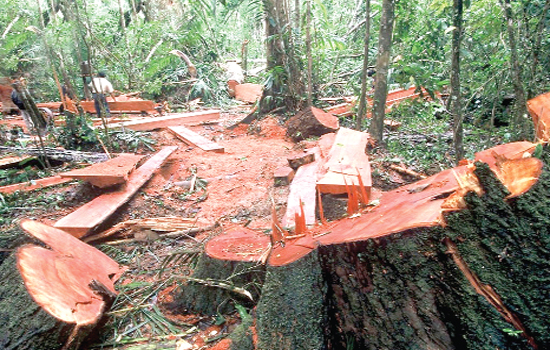 ISLAMABAD- For decades, illegal loggers have been hacking away at the forests of Gilgit-Baltistan in northern Pakistan while facing few penalties. But that is now changing as local people, armed with new powers to confront and fine illegal loggers, and to oust problematic local officials, fight back. In Diamer, one of the nine districts of Gilgit-Baltistan, forests of chilgoze and shah balut trees once covered 35 percent of the district. Today that has fallen to 20 percent after timber smugglers in 1980 began cutting large swathes of forest. "If the illegal cutting of trees continues at the same pace, the forest cover in the region will be reduced to just five percent in the next 20 years," predicted Khan Muhammad, chairman of the Himalayan Conservation Welfare Movement, which works for the rights of the area's forest communities. Until recently, the timber mafia was able to work freely by bribing local people and officials, environmentalists say, and paying a higher rate for wood than the government. Under the new initiative in Daimer, however, villagers and authorities are trying to help each other resist the smugglers' tactics by sharing the responsibility for protecting the forests. Today, a committee from each of the district’s 52 villages has been given the power by the government to detain and fine anyone involved in timber smuggling. Also, for the first time, local authorities have to answer to villagers on issues of illegal logging and can face termination if two or more committees suspect them of working with the timber smugglers. “Under an agreement with the forest department, the officials will be accountable to the village committees and act on their suggestions to protect the forests,” Muhammad said. According to government data, Pakistan has a forest cover of 4.4 million hectares or five percent of its total land area. The forestry sector contributed $1.3 billion to Pakistan’s economy in 2011, and employs approximately 53,000 people. But poverty is driving deforestation. The country is losing 27,000 hectares of forest each year, one of the highest deforestation rates in the world, according to Global Forestry Watch. For many who are unable to make a living any other way, felling trees to sell to traders in illegal timber is their only option. LEGAL TIMBER PRICES TOO LOW In Diamer, smugglers offer locals 500 to 800 rupees ($5 to $8) per cubic foot of timber, which the smugglers then sells for up to seven times that amount, according to Sher Khan, 30, a member of the village committee in Chilas. In contrast, the government pays only 40 rupees ($0.40) per cubic foot on trees that are harvested and sold legally. "We have suggested to the government that it should increase the royalty to at least 2,000 rupees ($20) per cubic foot, to discourage locals from working with the timber mafia,” Khan said. The villagers also want to be able to earn a living from trees they are trying to protect. People feel “they can earn a modest income by harvesting cumin and pine nuts from the forests if they succeed in defeating the timber mafia,” Khan said. Manzoor Ahmad Qureshi, manager of community development at the non-profit Diamer Poverty Alleviation Programme, said local people need to be assured that the area's natural resources are their property and helped to make sustainable use of the forests. “A private organisation is doing organic certification of pine nuts and cumin in the area and this will help increase the forest communities’ income manifold,” he predicted. STILL STRUGGLING TO ENFORCE While the village committees in Diamer have new powers, they still find themselves outmatched by timber smugglers in technology and other resources, local experts say. The forest department lacks the resources it needs to effectively monitor all the forests in the region, while the smugglers have access to all the equipment and money they need, said Aftab Mehmood, a divisional forest officer at the Gilgit-Baltistan wildlife department. have proposed to the government that it raise a special force in the region to combat the timber smugglers and protect the rights of the local forest communities,” he said. Mehmood said many of the arrests made by the village committees also do not lead to penalties adequate to halt the illegal timber trade. "Despite our meagre resources we arrested 30 timber smugglers last year and sent them to prison, but almost all are released now," he said. He and other activists claim that the current system of fining loggers based on the estimated market value of the timber cut down is ineffective, and that forestry officials often impose only minimum fines on smugglers and free them with little or no prison time. With the help of the village committees, Mehmood's department has drafted a new bill, the Forest Act 2015, which aims to double the fine for illegal logging to one million rupees (6,566 pounds) irrespective of the value of the timber, and increase the maximum prison sentence from six months to at least seven years. They plan to present the draft bill to the local assembly for approval in May. “We are hopeful about saving our forests from the timber smugglers, as the officials and villagers are working together for the first time," said Muhammad of the Himalayan Conservation Welfare Movement. "The forests are our property, and we will not let them fall into the hands of the mafia." - Reuters