Giving NRO would be equivalent to treachery with country: PM


ISLAMABAD (92 News) – Prime Minister (PM) Imran Khan on Sunday termed that giving National Reconciliation Ordinance (NRO) to anyone would be equivalent to committing treachery with the country.

In a statement, Imran Khan lashed out at opposition parties and said that unless they are held accountable, the country could not be put on track of progress.

“These people want to hear three words from my side. I will not give NRO to anyone,” he reassured.

“Unless they are held accountable, the country could not be put on track of progress. They just want to hear three words ‘NRO’ from me, which I will not utter as it will amount to treachery with the country,” the prime minister said, on the PTI official page of Facebook. 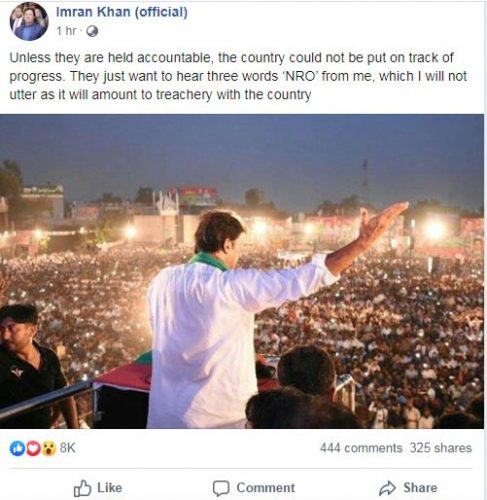 On October 28, addressing the inauguration ceremony of Baba Guru Nanak University in Nankana Sahib, the prime minister has once again reassured his commitment that he will not give National Reconciliation Ordinance (NRO) to anyone until he is alive.

“Pakistan is indebted because of two NROs that were given in the past. “I will not grant NRO to anyone until I am alive,” he added.

Why marchers coming to Islamabad for my resignation?

Referring on Jamiat Ulema-e-Islam-Fazl’s (JUI-F) anti-government Azadi March, PM Khan said that the opposition parties are afraid of Pakistan Tehreek-e-Insaf’s (PTI) spectacular performance and asked, “Why marchers are coming to federal capital for my resignation?”

PM Khan has regretted the purpose of protest March is to create hindrance in the implementation of government’s policies which have started delivering positive results. He said the organizers of March are scared of the successes of the government on the economic front.

Imran Khan also termed protest March as a blackmailing tactic. He also mentioned that no NRO will be given to the corrupt elements no matter they hold the march or resort to any other blackmailing.