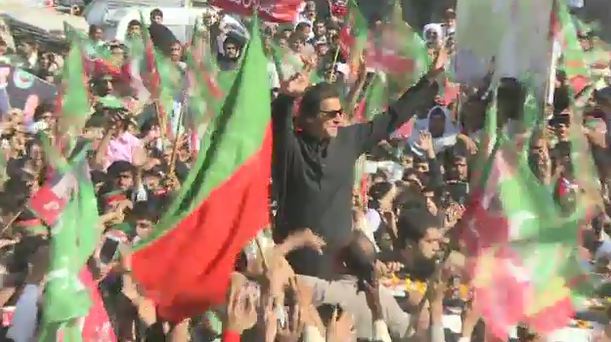 MIANWALI (92 News) – Pakistan Tehreek-e-Insaf chief Imran Khan has on Sunday said that the Nandipur Power Project could not work but the advertisement of both prime minister Nawaz Sharif and chief minister Punjab Shahbaz Sharif have worked. Addressing a political rally in Mianwali on Sunday, Imran Khan said that the government has failed to address the reservations of farmers, adding that the farmers are facing difficulties due to increasing inflation. He said that the farmers have always faced problems during the tenure of Pakistan Muslim League-Nawaz (PML-N). The PTI chief said that the people of Mianwali will vote for ‘Bat’ just like they did in 2013 general elections. The second phase of local government elections is scheduled for Nov 19 in 12 districts of Punjab and 15 districts of Sindh. The districts of Punjab where LG elections are to be held are: Khanewal, Sahiwal, Toba Tek Singh, Chiniot, Sargodha, Mianwali, Sheikhupura, Gujranwala, Hafizabad, Mandi Bahau­ddin, Attock and Jhelum.