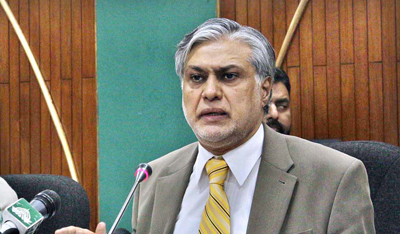 KARACHI (92 News) – Federal Finance Minister Ishaq Dar has on Wednesday said that neither the government accepted aid after earthquake nor the government has not made money for Operation Zarb-e-Azb. Addressing the opening ceremony of All Shares Islamic Index of Pakistan, Ishaq Dar said that the world now has Islamic Finance worth US$ 2.6 trillion. Governor State Bank, Ashraf Wathra and Chairman Federal Board of Revenue Nisar Ahmad have participated in the ceremony. Dar inaugurated the All Shares Islamic Index of Pakistan with a traditional bell. “We are working for the promotion of Islamic Finance Sector in the country,” he said. The finance minister said that no one was there to buy Pakistani bonds during the tenure of the previous government, adding that the Islamic Banking is their responsibility. “We have listed the T-Bills in the Karachi Stock Exchange (KSE),” the minister said. He said that Pakistan Bond Market was set during the last 10 years. “All institutions including FBR are working for the development in the country.”