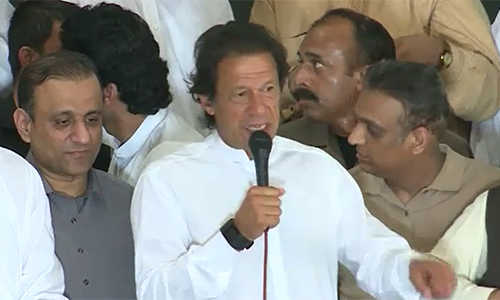 KARACHI (92 News) – Pakistan Tehreek-e-Insaf chairman Imran Khan has on Sunday said that there is dictatorship in Pakistan in the name of democracy and leaders should be asked why the local government elections were not held for too long.

Addressing the Youth Convention in Karachi’s Qayyumabad, the PTI chairman said that the local governments are the foundation of democracy but the LG polls were not held for too long, adding that the leaders only come to power to make money.

Imran Khan said that the two largest political parties of the country have come to power six times each but this is the first time a democratic government is holding LG polls, adding that around 53,000 votes were found unverified in NA-122.

Addressing the party workers in Banaras Chorangi, cricketer turned politician said that the government is introducing new taxes after taxes and economically killing the people.