ISLAMABAD (92 News) – On the recommendation of the Oil and Gas Regulatory Authority (OGRA), the government has reduced the petrol price by Rs4.59 per liter on Friday. 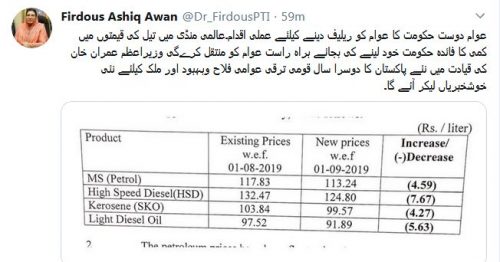 Later, the Finance Ministry declared Firdous Ashiq Awan’s tweet wrong and said that high-speed diesel has been reduced to Rs5.33 instead of Rs7.67 per liter.

On the other hand, the LPG price has been reduced by Rs22 per kg. The new price of LPG has been fixed at Rs112 per kg.

The Oil and Gas Regulatory Authority (OGRA) has issued a notification in this regard. The new prices will be applicable from September 1.

Earlier, Advisor to Prime Minister on Finance Dr Abdul Hafeez Sheikh hinted at the prices of petrol and petroleum products (POL) may go down next month.

He further says the country’s economy is getting improvements in the light of steps being taken by the government.

In the previous month, on the recommendation of the Oil and Gas Regulatory Authority (OGRA), the government has increased the price of petrol by Rs5.15 per liter.

Moreover, the high-speed diesel price has been raised by Rs5.65 per liter. Now it will be sold at Rs132.47. The price of light diesel has been fixed at Rs90.52 per liter.

On the other hand, the per liter price of kerosene oil has been increased by Rs5.38. Now it will be available at Rs103.84 per liter.

The OGRA has calculated ex-refinery sale prices of petroleum products at the standard 17% GST. Average price of crude oil imported by Pakistan State Oil (PSO) in previous three months (April-June 2019) is $65 per barrel.

In its outlook for 2019-20, the World Bank has forecast that crude oil prices will hover around $67 per barrel.