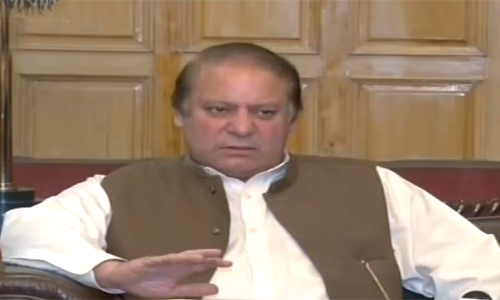 LAHORE (92 News) – Prime Minister Nawaz Sharif has on Monday said that the government is working day and night for the welfare of the masses. Addressing a high level meeting in Model Town Lahore on Monday, the Prime Minister said that resources are being provided on priority basis for provision of basic amenities to the people. “Every penny is being spent honestly on the welfare and prosperity of the people,” he said. Chief Minister Punjab Shahbaz Sharif was also present. The Nawaz Sharif said that projects are being implemented rapidly in Punjab and other parts of the country to facilitate the people. “They are making efforts to resolve the basic problems of the people through execution of mega projects, he added. The Prime Minister directed the elected representatives to focus on the problems of the people in their respective constituencies and resolve them. He further directed that no stone should be left unturned to provide education, health facilities, clean drinking water, improvement of infrastructure and other facilities to the people. Nawaz Sharif said historic Kissan package will benefit the farmers, adding that immediate action was taken to provide relief to the earthquake affected people and he himself visited the affected areas for this purpose.