Al-Asheikh the official sermon delivered Hajj sermon in Masjid-e-Nimra at Mount Arafat on Thursday. Addressing on day of Arafat 9 of Dul Hijjah, the grand mufti said that said Islam forbids us from indulging in sins and vulgarity.

Dr Hussein bin Abdul Aziz said that Islam propagates harmony and brotherhood among Muslims. He said success can only be achieved by following the path of Quran and Sunnah. He said that rule of law and justice are the hallmark of an Islamic society.

The imam said that Allah likes those, who are honest and pay Zakat and do charity. He also said that Islam preaches respectful behaviour, good character. He urged Muslim to quit the route of disappointment and adopt to the right path given by Almighty Allah. “We should follow the teachings of Islam and we have to fear only from God.

Instructed the teachings of Islam, the Mufti said that always speak the good and the fulfillment of promises also part of the religion. “Do good deeds with parents and neighbours and treat him in a best possible way.

“Islam is a gift of God for us, this religion is a religion of definite teachings and peace. The Prophet has directed us to be God-fearing and thankful to Him who bestowed us with faith. Therefore, the Muslims must staunchly follow those teachings,” he said.

The Mufti said “Oh! Muslim youths! Do not play in the hands of those disseminating fitna, but utilise your mental, physical and spiritual capabilities in the way of Allah and for the sake of His religion.” The chief mufti urged Muslims to staunchly practice Islam which is a gift of God for the entire humanity.

However, the pilgrims will perform Zuhr and Asr prayers combined, and spend time in Arafat with prayers for acceptance of their pilgrimage and recitation of Quranic verses until sunset. 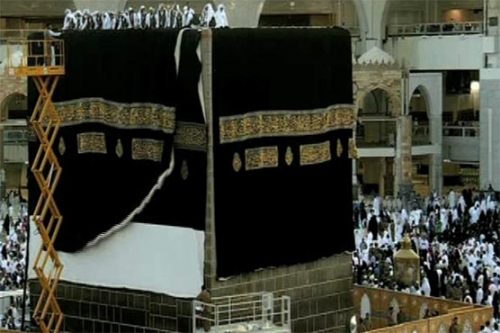 Earlier today, the annual ceremony to change Ghilaf-e-Kaaba held at Masjid-e-Al-Haram (the Sacred Mosque) in Saudi Arabia where millions of Muslims have gathered to perform Hajj.

More than two million Muslims from around the world scaled the rocky hill southeast of the holy city of Makkah to perform the pinnacle of Hajj. Mount Arafat is where Prophet Mohammed (PBUH) delivered his final sermon.

After sunset, the pilgrims will head to Muzdalifah, where they will stay until midnight, engaged in prayers after performing Maghreb and Isha prayers combined. 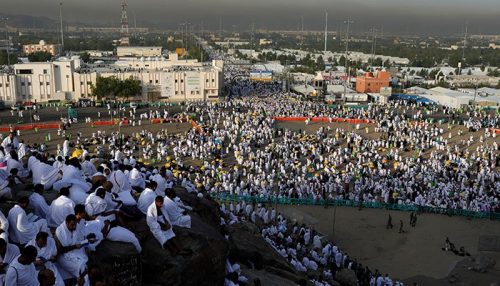 Every Muslim is required to complete the Hajj journey to Islam’s holiest sites at least once in their lifetime if they are healthy enough and have the means to do so.

Tens of thousands of security personnel have been deployed for the pilgrimage, which was struck by its worst-ever disaster three years ago when around 2,300 worshippers were crushed to death in a stampede.

This year, the Saudis have launched a “smart Hajj” initiative, with apps to help pilgrims with everything from travel plans to medical care.

The interior ministry said on Saturday that the number of pilgrims arriving in Makkah had already surpassed the two million mark, mostly from abroad including large contingents from Egypt, India, Pakistan and Bangladesh.