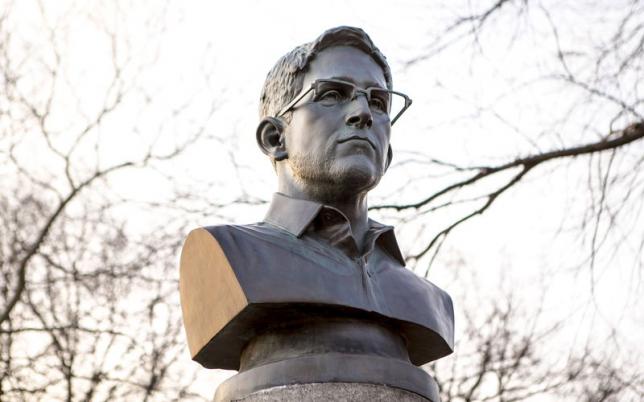 NEW YORK - A group of anonymous artists erected a 4-foot-tall bronze statue of Edward Snowden, the former US spy agency contractor famous for leaking classified information, in a New York City park overnight, officials said on Monday. The large moulded bust of Snowden, depicted wearing a collared shirt and his signature glasses, was placed atop a stone pillar that is part of an existing monument at Fort Greene Park in Brooklyn, photos posted to social media showed. The name "Snowden" spelled out in bronze letters appeared to be attached to an adjacent shorter pedestal on top of which sits a bronze bald eagle spreading its wings, a statue that has long made its home in the park. The idea for the statue was conceived by two New York guerrilla artists who worked with a West Coast sculptor to create the finished piece, reported Animal New York, a local news and culture blog, which was invited to witness the late-night installation. The artists, whose names were not disclosed, said they sympathized with Snowden, the former US National Security Agency contractor who leaked details of massive US intelligence-gathering programs and remains in hiding in Russia, and intended to pay tribute to him with the installation. "Our goal is to bring a renewed vitality to the space and prompt even more visitors to ponder the sacrifices made for their freedoms," they said in a statement published by the blog. "We hope this inspires them to reflect upon the responsibility we all bear to ensure our liberties exist long into the future," they said. By late afternoon on Monday, park officials removed the illegal statue, which park workers had covered with a blue tarp. Park spokeswoman Maeri Ferguson said park officials were deciding what to do with it. Ferguson did not say whether park property had been damaged. City police said they were investigating. - Reuters