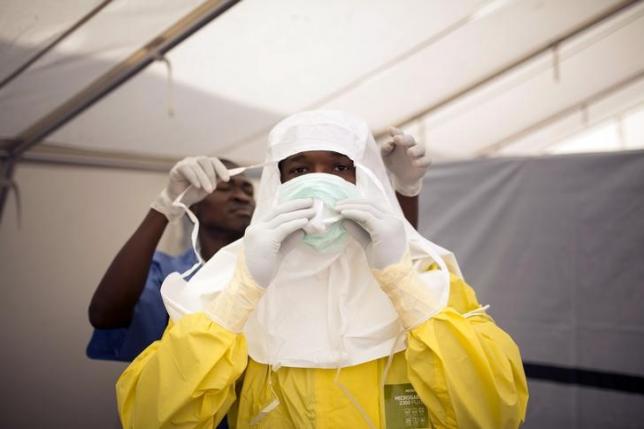 DAKAR - A one-month-old baby girl who was Guinea's last reported Ebola case left hospital on Saturday, delighting medical staff and putting the country on course to be declared free of the deadly virus.

Guinea will become officially Ebola-free after 42 days if no new cases are reported following the recovery of baby Nubia -- thought to be the first baby to survive after being born to an infected mother.

An Ebola outbreak has killed about 11,300 people mainly in Guinea, Liberia and Sierra Leone since it began two years ago. Liberia is now the only country with confirmed cases after the virus re-emerged for a third time.

"This is a very happy day for us," Laurence Sailly, head of medical charity Medecins Sans Frontieres'(MSF) emergency team in Guinea, told Reuters on Saturday. "It was very moving for us and the family to be able to touch her without gloves."

Family members and medical staff played music and danced to celebrate Nubia's release from the Nongo treatment center in the capital Conakry. She tested negative for the hemorrhagic fever last week, but MSF kept her in for monitoring.

Sailly said she thought that Nubia, who was born Ebola-positive and named after an MSF nurse, was able to survive due to experimental drugs as well as round-the-clock care given by a 20-strong team.

"When she (Nubia) started having convulsions, we thought the virus had entered the brain and that's when we started the anti-viral," Sailly said. "Everyone was following hour by hour."

Nubia was connected to a monitoring system which allowed staff to track her breathing and heart rate without entering the high-risk zone, although staff still had to enter regularly to change her diapers and bottle-feed her.

"She is a symbol of what we are capable of doing at this stage of the epidemic," Sailly said.

At the height of the outbreak last summer, some Ebola patients died in the street in Liberia waiting for hospitals to admit them. At a center in Sierra Leone, doctors tended to dozens of patients each.

Ebola patients are highly-contagious and can spread the virus through fluids emitted in high quantities during the late stages of infection, such as blood, vomit and diarrhea.

For ordinary Guineans, the recovery of Baby Nubia has raised hopes that the virus has gone for good.

"We want Ebola to leave this country. The baby is cured, and may God strengthen her health," said Conakry resident Moussa Sylla after news of Nubia's recovery became known last week. "All this is a source of joy for us." -Reuters