During the address, Chief of the Naval Staff shared his vision for Pakistan Navy and discussed in details the ongoing projects of Pakistan Navy. 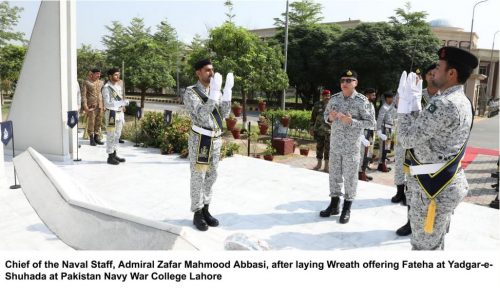 Highlighting the potentials of maritime economy, he said that Gwadar Port promises greater economic spin offs for the country, region and beyond. While appreciating the operational resolve of the armed forces, the Naval Chief said that with unwavering faith in Allah Almighty, Pakistan Navy is ready in all respects to defend the maritime frontiers of our motherland. He further advised the course participants to draw their inspiration from true Islamic thought and ideology of Pakistan.

Highlighting the changing geo-strategic milieu in the region and international arena, the Naval Chief said that the world is facing numerous threats in the maritime domain which include piracy, illegal trafficking, smuggling and terrorism. “Pakistan Navy has always been at the forefront in ensuring safety and security of international waters through collaborative maritime security with other navies and also through Pakistan Navy’s independent initiative of Regional Maritime Security Patrols,” he maintained.