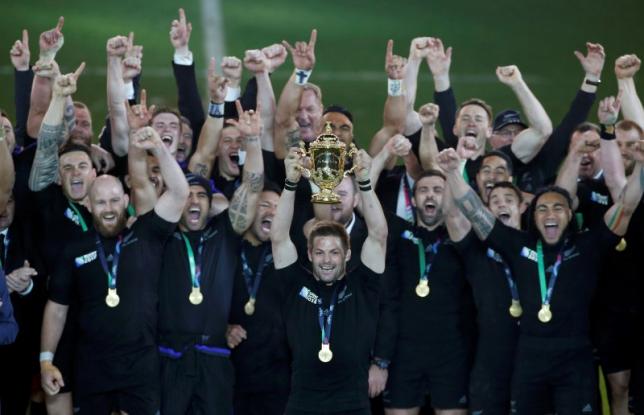 WELLINGTON - World champions New Zealand were welcomed home by chanting crowds and a string of hakas on Wednesday as the All Blacks embarked a three-day journey around the country to celebrate their third Rugby World Cup triumph. The festivities began at Auckland airport even before the doors of the Air New Zealand jet had opened when a group of groundcrew in high visibility vests performed a haka, the traditional Maori war dance, on the tarmac. Captain Richie McCaw had the Webb Ellis Cup clutched in his hands as the players entered the terminal to be greeted by some 4,000 fans, many of whom had been in position for hours, chanting "All Blacks! All Blacks!" Another haka performed by Maori in more traditional garb later welcomed the squad to Victoria Park in the centre of the city for a welcome ceremony, where the players signed autographs and took "selfies" with fans. As the All Blacks took their place on stage, a group of schoolgirls performed another Maori welcome followed by a third haka of the morning from their male counterparts. "The boys left eight weeks ago on a mission that started perhaps four years ago," McCaw told the cheering fans. "We knew the challenge was going to be a big mountain to climb ... but getting home this morning has certainly made all that hard work worthwhile. "We heard that this country was going pretty nuts on Sunday morning and now we can all smile for the next four years knowing we are world champions." Hailed as the greatest side to have played the game, New Zealand were the first team to win the World Cup three times and the first to retain the trophy after their 34-17 victory over neighbours Australia at Twickenham last Saturday. The festivities will continue with a street parade and reception in Christchurch on Thursday and more celebrations in the capital Wellington on Friday. For the likes of World Player of the Year Dan Carter, centres Ma'a Nonu and Conrad Smith, as well as veteran hooker Keven Mealamu, the trip will be a valedictory tour as all have played their last match for the country. McCaw has yet to confirm whether or not he will be retiring after a record 148 tests for New Zealand but Smith thought the future of the All Blacks brand was safe. "It's been a dream come true," Smith said of his 94-match international career. "I've loved it but it's time for the young fellas to take over. And they'll do a good job so that makes it a bit easier." -Reuters