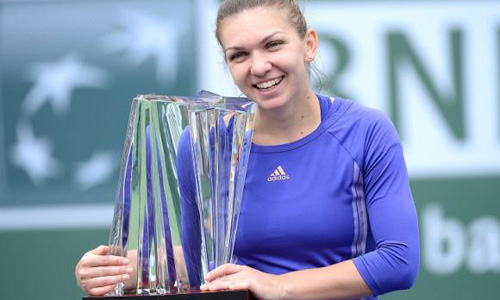 CALIFORNIA - Romania's Simona Halep won the BNP Paribas title with a 2-6 7-5 6-4 comeback victory over Serbia's Jelena Jankovic in an exciting final at Indian Wells on Sunday. Jankovic served for the title at 5-4 up in the second but Halep, the world number three, won the next three games and battled back for the biggest title win of her career. The tense, enthralling encounter had both players making plenty of mistakes but the 23-year-old Halep displayed impressive determination to secure her third title of the year following triumphs in Shenzhen and Dubai. The 30-year-old Jankovic, who had a testy exchange with her coach, showing clear signs of nerves when she had the title within her grasp before tiring badly in the third set. Halep received a bye into the final after world number one Serena Williams withdrew from their semi-final with injury but she struggled in the opening set. Jankovic, who won at Indian Wells in 2010, dominated the first set, playing with freedom and fire but as soon as she came within sight of victory in the second set, she tensed up. She was 3-1 up but lost her break as Halep began to show her character when it counted. Nonetheless, the Serb broke again to go 5-4 up but the Romanian fought for every point before finally edging ahead in the 63-minute second set. Both players struggled to keep serve in the third, Jankovic breaking to go 2-1 up but Halep brought it level at 3-3 and then broke Jankovic to lead 5-3. This time Jankovic dug deep to break back but there was something inevitable about the way she then allowed Halep to break again and secure her 11th career WTA title. - REUTERS