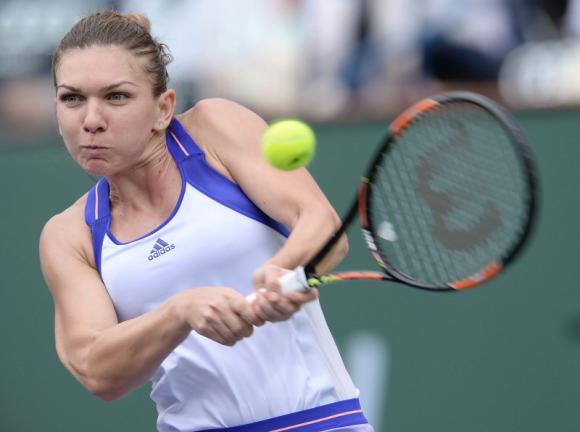 INDIAN WELLS –  World number three Simona Halep turned up the aggression and rallied for a 5-7 6-1 6-1 victory over Carla Suarez Navarro to claim the first women's semi-finals berth at the BNP Paribas Open on Wednesday. The Romanian overcame a blistering start by 12th seed Suarez Navarro at Indian Wells to move a step closer to what would be her biggest tournament title. "I'm looking forward to maybe playing the No. 1 in the world again now," said Halep, who will face the winner of the later quarter-final between top-ranked Serena Williams and 27th seed Timea Bacsinszky of Switzerland. Suarez Navarro could do no wrong in the opening stages of the match, sweeping the first four games to go up 4-0. But Halep clawed back to 4-4, and then 5-5, before the Spaniard regrouped and unleashed a huge forehand winner to claim the first set. From then on, Halep dominated. "She was opening the court pretty well with the angles, and it's really tough to play and hit the balls from wide in the court, so I knew I had to start playing more aggressively and hit more into the court," Halep said in her on-court interview. "I just tried to relax my body and my mind, fight for every point and play my best." Halep, whose two biggest career titles to date are Premier 5-level wins in Doha last year and Dubai this year, finished the match in style, blasting a big ace for her 28th winner. – Reuters