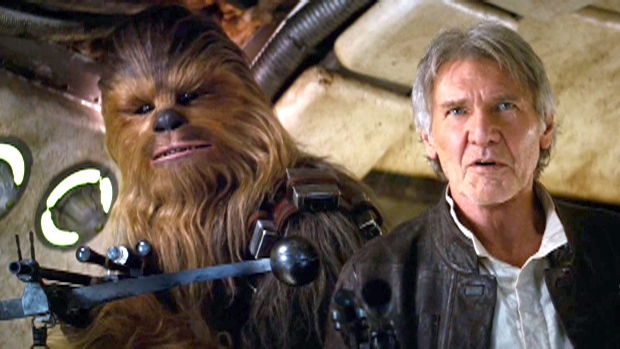 SAN DIEGO - Han Solo made his official comeback to "Star Wars" on Friday as actor Harrison Ford was the star guest at Comic-Con, and fans were given a glimpse of some behind-the-scenes footage of the new film "The Force Awakens". Ford made his first public appearance since a March crash of a vintage aircraft he was piloting that left him with non-threatening injuries, for which he had surgery on his leg. The actor, 72, bounded onto the stage at the San Diego convention for film and pop culture. He said he was doing "fine," and reflected on returning to the films that launched his career. "It should have felt ridiculous. It was 30 years ago and I sort of grew up and yet I was doing something I did so long ago, and I will tell you that it felt great," Ford said about his return to playing rogue smuggler-turned-rebel fighter Han Solo. "Star Wars: The Force Awakens," due in theaters in December, is the first of a new trilogy rebooting George Lucas' "Star Wars" franchise. Ford was accompanied by "Star Wars" veterans Carrie Fisher, who plays Princess Leia, and Mark Hamill, who plays Luke Skywalker. Fisher said the three of them picked up where they left off during filming, and also enjoyed watching the newcomers to the franchise. They were joined by actors John Boyega (Finn), Daisy Ridley (Rey) and Oscar Isaac (Poe Dameron), the three leads who will fight the dark side, of which actors Adam Driver (Kylo Ren), Domhnall Gleeson (General Hux), Gwendoline Christie (Captain Phasma) represented on Friday. Driver didn't reveal anything about Kylo Ren, but Gleeson said his General Hux will be in charge of people on the Starkiller base, part of the dark side. Christie said it was "exciting" to explore playing a female Stormtrooper, soldiers of the dark side. While "The Force Awakens" will feature a large amount of special effects, fans were treated to a clip of behind-the-scenes footage which showed real explosions, robotic creatures and intricate sets that director JJ Abrams said were essential for authenticity and for actors to interact with. The surprises didn't end with Ford's appearance, as fans were 'escorted' by Stormtroopers to a live concert of composer John Williams' "Star Wars" score at a nearby venue. - Reuters