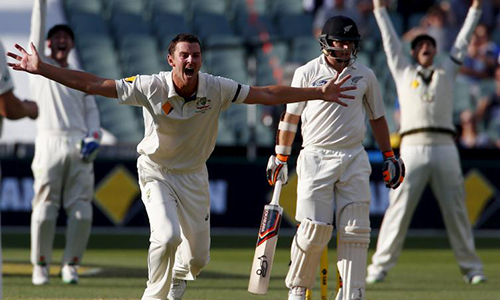 ADELAIDE – Paceman Josh Hazlewood stepped up in the absence of injured spearhead Mitchell Starc to give Australia a sniff of victory within three days after a farcical third umpire decision stole the tourists' momentum during the third test on Saturday. Hazlewood shone under the floodlights of Adelaide Oval with a miserly 3-32 and New Zealand slumped to 116-5 at the close of a roller-coaster day two, hounded by the hooping pink ball in the inaugural day-night test. The Black Caps clung precariously to a 94-run lead after 13 wickets tumbled, adding to the 12 that fell on the opening day. Debutant all-rounder Mitchell Santner (13 not out) and BJ Watling (7) were left to salvage something from the wreckage but New Zealand's hopes of a series-levelling victory looked fraught as darkness descended. It was a far different scenario earlier in the day as their bowlers tourists dominated in the sunshine and Australia crashed to 118-8 in reply to 202. But third umpire Nigel Llong made a howling intervention, thumbing his nose at the decision review technology that strongly suggested spinner Nathan Lyon had nicked a catch to the slips from a bungled sweep shot. A ball from debutant spinner Santner had ricocheted off Lyon's upper arm and though field umpire Sundaram Ravi waved the appeal away, the 'Hot spot' technology showed a mark on his bat. That was enough for Lyon who proceeded to walk back to the dressing room, but 'Snicko' showed no audio evidence and Llong dithered for five minutes watching angle after angle, raising jeers from the crowd of 42,372 before issuing his judgement. "The players were pretty confident that it was out," New Zealand batsman Ross Taylor told reporters. "Obviously the hot-spot that showed up, Lyon walking off and nearly getting to the boundary, I think it's had a big bearing on the match." It cost New Zealand their last review and triggered a momentum shift as Lyon and wicketkeeper Peter Nevill plundered the bowlers. Lyon smashed Santner for 15 runs and a leg bye in one over before falling for 34, bringing a hobbling Starc to the crease who added to New Zealand's pain with an unbeaten 24. He blasted spinner Mark Craig over the long on fence twice in one over as Australia charged past New Zealand's total. Australia's innings finally ended on 224, after Nevill was caught in the deep for 66, but the last two wickets added 108 and condemned New Zealand's batsmen to defend in the most perilous evening session. Hazlewood removed openers Martin Guptill (17) and Tom Latham (10) and later trapped Ross Taylor in front for 32. Fast-bowling all-rounder Mitchell Marsh had Kane Williamson caught behind for nine and removed Brendon McCullum lbw for 20 as New Zealand's hopes faded. SCOREBOARD