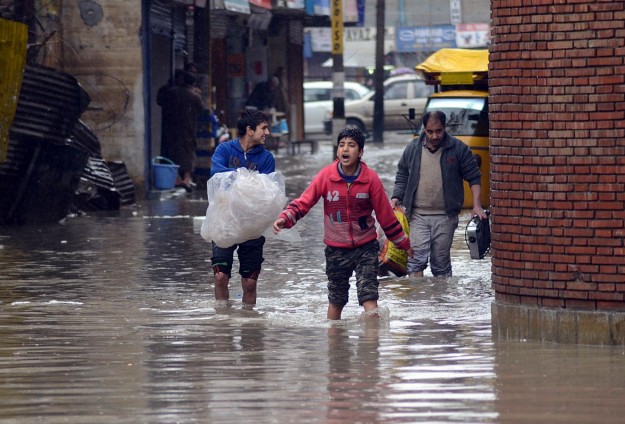 HOWRAH - Flash floods caused by heavy rains in Howrah district of India's eastern West Bengal state brought daily life to a halt as railway tracks and roads were submerged on Saturday. The meteorological department has attributed the heavy rainfall to a deep depression over northeast Bay of Bengal which has intensified into cyclonic storm Komen. Earlier, the cyclone made a landfall in Bangladesh. It is expected to bring with it heavy rainfall in West Bengal and neighbouring Odisha states. Schools and offices remained shut as water entered premises making them inaccessible. People were seen operating from makeshift offices from roadsides. "The road outside my office is flooded due to which we cannot enter the office premises. It is also posing problems for the labour to reach office," said a resident, Chandradev Chaudhary. Chief Minister of West Bengal, Mamata Banerjee, said on Friday (July 31) that 39 people had been killed in the floods so far. Banerjee also announced a compensation of rupees 200,000 ($3,128) for the kin of those killed. According to the meteorological department, the wind speeds along West Bengal and north Odisha coasts will vary between 65-75 kilometers per hour and can go up to 85 kilometer per hour. Apart from Howrah, maximum rainfall is expected in West Bengal's East Midnapore, North and South 24 Parganas, Hooghly, Birbhum and Burdwan districts. The state government has already moved 26,000 people to relief camps across seven districts. A total of 227 relief camps have been set up in the state. An emergency helpline number 1070 has also been started to monitor flood situation. Advisories have been issued warning fishermen to keep away from the sea. Other parts of India which are expected to witness heavy rainfall this week are northeastern states of Mizoram, Tripura and Assam and eastern Jharkhand state. In October last year, cyclone Hudhud slammed into the coast of Andhra Pradesh and Odisha, tearing down tens of thousands of mud-and-thatch homes, and flattening rice, banana and sugarcane plantations. At least 41 were killed in the two states and 150,000 people were forced to abandon their homes. The tail end of Hudhud went on to cause sudden and severe snowstorms further north in Nepal, killing at least 30 people on the Annapurna circuit, a Himalayan trek that is popular with foreign adventure tourists. -Reuters