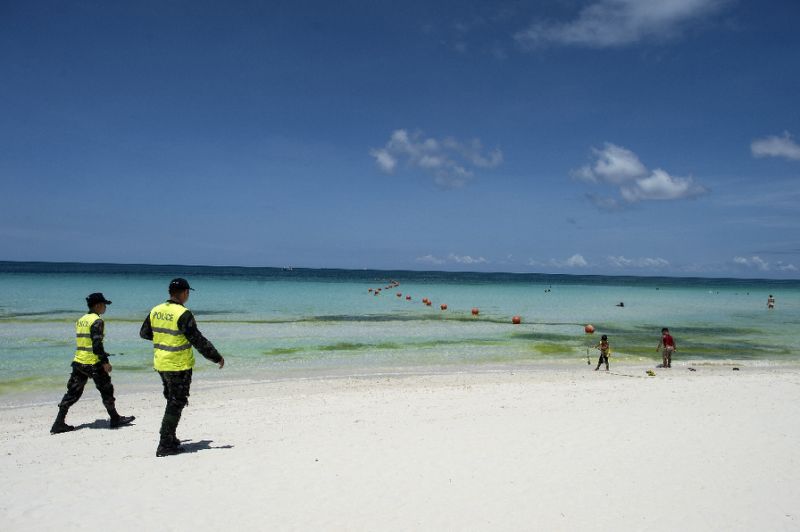 MANILA (AFP)- The Philippines shuttered its most famous holiday island Boracay to tourists on Thursday for a six-month clean-up, which the government has imposed with a muscular show of its security forces.

Coast guard boats were on patrol and assault rifle-wielding police were posted at entry points to the once-pristine island that has become tainted by heavy commercialisation and overdevelopment.

Regional police head Cesar Binag told AFP the shutdown began past midnight, with tourists barred from boarding the ferry that is the main way onto the island.

"Boracay is officially closed to tourists. We are not closing establishments but tourists cannot enter. We are implementing the instruction of the president," Binag said.

About 600 policemen were deployed, with some performing life-like drills including riot officers battling bottle-hurling protesters and mock hostage taking of sunbathers -- all before startled locals.

"My nephews and nieces were afraid," Filipino tourist Tara Calcetas told AFP. "It was scary because there were people swimming yesterday (at the beach) and the police were firing guns as if there was a criminal here."

The government conceded on Thursday there was no real threat, with interior ministry assistant secretary Epimaco Densing telling AFP the security presence was "just part of preparing for the worst".

President Rodrigo Duterte ordered the shutdown this month after calling the resort a "cesspool", dirtied by tourism-related businesses flushing their raw sewage directly into the ocean.

During the closure, only residents with ID cards are allowed to board ferries to Boracay, which is home to around 40,000 people.

People on the so-called "party island" held a final bash on the beachfront on the eve of the closure, complete with a fireworks display and cheers of "Bye, Bye Boracay".

But on Thursday, residents had the swaying palms, turquoise waters and usually mobbed white-sand beaches mostly to themselves.

"This is what you call an island, a paradise. Boracay looks like its original beautiful self," said restaurant cook John Reymar.

The Philippines has pledged to take advantage of the calm to spruce up the 1,000-hectare (2,470-acre) chunk of bruised paradise.

There are plans to bulldoze illegal or dilapidated structures, to shore up the island's infrastructure and clean up the mess left by years of unchecked growth.

However, plans to help the up to 30,000 people who had been employed by the island's bustling tourist trade were less clear. Though Duterte has promised some $38 million in funds to help workers, they say they haven't seen a cent yet.

The workers were drawn by the relatively good wages on the island that has seen the number of visitors roughly quadruple to two million since 2006.

Those tourists, a growing number of whom are Chinese and Korean, pumped roughly $1 billion in revenue into the Philippine economy last year.

But its growth from a sleepy backpacker hideaway into a mass-tourism hub with fast food outlets on the beach has taken a toll.

Unchecked construction has eaten away at the island's natural beauty, while slimy algae-filled waves in some areas and mountains of discarded drink bottles are problems acknowledged even by critics of the shutdown.

"I'm all for rehabilitation and preserving it but clearly this is not the way to do it," Philippine politics expert Ashley Acedillo told AFP.

He called the closure an "ill-thought through, unplanned and knee-jerk action" that did not take into account the economic impact on the island's workers and business community.

Reymar, the restaurant cook, agreed: "But maybe without tourists, what is the use of having a beautiful island?"