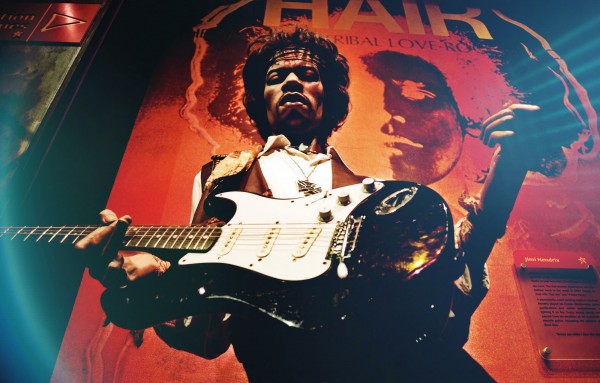 NEW YORK (Reuters) - Collectors who want to own a piece of music history - Fender, Gibson and Guild guitars used by the likes of Tom Petty, Paul McCartney and Jimi Hendrix - will have to be ready to put up some serious cash next month in New York City.

That is when Guernsey’s auction house, on Dec. 2 at Bohemian Hall, will put up for sale guitars, saxophones, session tapes and other music memorabilia associated with some of the most famous musicians of the 20th century. The auction follows Guernsey’s sale of Jerry Garcia’s “Wolf” guitar in May for $1.9 million.

Included in the sale is a red, sticker-covered Guild guitar used by Hendrix in 1968 at a Miami, Florida, hotel after a music festival got rained out.

“He and other musicians and as many fans could pack into the neighboring hotel jammed into there for what amounted to a jam session, and this is the guitar he played,” said Guernsey president Arlan Ettinger.

Also up for auction is a 1953 “Goldtop” Gibson Les Paul used by Paul McCartney as recently as 2012, according to Ettinger.

Bruce Springsteen’s bass guitar that he used on his first album will also be on sale, as well as a black Gibson Les Paul Madonna used on tours in 2001 and 2008, when “she was going to come out and show the world that she could play.”

Master recordings of James Brown and Elvis Presley, and recorded live performances of the Beatles, the Rolling Stones and others will be included in the sale.