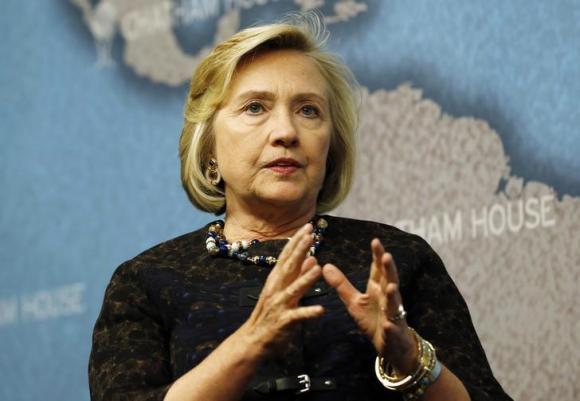 WASHINGTON (Reuters) - Former US Secretary of State Hillary Clinton may have violated federal records laws by using a personal email account for all of her work messages, the New York Times reported on Monday. The newspaper said the likely Democratic presidential candidate conducted all her official business during her four-year tenure at the State Department on a private email account. It added that Clinton, who stepped down as secretary of state in 2013, recently handed over 55,000 pages of emails to the State Department in response to a department effort to comply with record-keeping practices. Federal law says letters and emails written and received by federal officials are government records that must be retained, according to the paper. Regulations at the time Clinton served as secretary of state called for emails on personal accounts to be preserved as well, the paper said. The Times said most experts believed private email accounts should only be used for official government business in emergencies, according to the Times. A spokesman for Clinton told the Times that Clinton was complying with the "letter and spirit of the rules" and had expected her emails would be retained. He declined to detail why she chose to conduct business from her personal account, the Times said. Responding to the report, State Department spokeswoman Marie Harf said the department last year asked former secretaries of state through their representatives to submit any records in their possession to improve record-keeping and management. "In response to our request, Secretary Clinton provided the department with emails spanning her time at the department," Harf said in a statement. Clinton's spokesman could not be immediately reached for comment. Clinton is widely considered the front-runner for next year's Democratic presidential nomination if she decides to enter the race. Her inner circle is currently discussing accelerating the formation of a campaign organization to April or May instead of waiting until the summer. With no definite opponents to the democratic presidential nomination, Clinton has felt no rush to jump into the race, but having a campaign team in place would allow her to respond forcefully to various accusations fired her way. It would also allow her to raise the millions of dollars needed for a campaign.