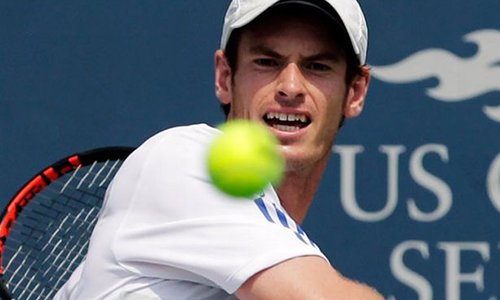 LONDON – Andy Murray has done a diligent job updating the dusty British tennis history books and if all goes to plan another chapter will be written in the Belgium city of Ghent next week. The 28-year-old Scot has almost single-handedly taken Britain to the Davis Cup final for the first time since 1978 and providing he does not suffer any mishaps they should win the team event for the first time since 1936. That year, together with the name Fred Perry, have been entwined with Murray's career since it became clear he was the real deal, not just another British also-ran. He became the first British man to win a grand slam since Perry in 1936 when he beat Novak Djokovic at the 2012 U.S. Open. A year later he ended his country's 77-year wait for a men's singles champion at Wimbledon, again beating Djokovic. He is also the reigning Olympic champion -- a gold medal he won by beating Roger Federer in London, a few weeks after a tearful defeat by the Swiss in the Wimbledon final.
But a Davis Cup winners' medal would complete the transformation from moody teenager with scruffy hair who once caused a furore for his supposed lack of support for the England soccer team, to a national sporting hero.
His Wimbledon title earned him the BBC Sports Personality Award and the tears he shed when recalling in a TV interview how he survived a massacre at his school in Dunblane, Scotland added a human touch to the single-minded professional image he usually portrays. Now married to long-term partner Kim and with a baby on the way, Murray's life looks complete. Yet, despite a mellowing of his character, world number two Murray's devotion to the Davis Cup this year has been fanatical. In three ties he is unbeaten. He won both singles against the United States in March, two singles and a doubles with brother Jamie against France just after Wimbledon and won three points again against Australia in the semi-finals -- the middle Saturday doubles being an epic. "The top players like Federer and Djokovic have won it and it would be another notch on his belt, rather like the Olympics," Mark Cox, part of the British team in 1978, told Reuters. "I don't think people fully appreciate what Andy Murray has achieved. "It's fantastic how committed he is to the Davis Cup now, he has put his whole heart and soul into winning this." His older brother Jamie is in no doubt. "He has put in a huge effort to get the team to the final," the 29-year-old, who qualified for the ATP World Tour Finals with partner John Peers, told Reuters. "Playing all three days in the last two ties was a monumental thing to do. He carried us into the final and I'm sure he will want to play three in the final too. "It's an unbelievable effort. But he knows if he wants to win the Davis Cup his best chance is to play all three days." It is likely Murray will partner Jamie in Ghent next Saturday and it is perhaps a good omen that brothers Reggie and Laurie Doherty played together in the 1904 final victory over Belgium. John and David Lloyd also played in the same team against the U.S. in the losing 1978 final -- since when 37 years have gone by with Britain largely in the wilderness. Belgium are the easiest opponents Britain have had this year -- but much still rides on Murray. "I don't think it's inaccurate to say Andy has almost done it on his own," Paul Hutchins, captain of the 1978 team, told Reuters. "Everyone knows the situation. "People assume he is going to win, but he still has to do it and that puts more pressure on him." This year's captain and fellow Scot Leon Smith will have watched his main man in action at this week's ATP World Tour Finals with his fingers crossed that Murray avoided injury. He knows that without the world number two at 100 percent, the odds would swing the way of Belgium whose top player is world number 16 David Goffin. "He keeps surprising me, his ability to produce the type of tennis he does under stress, fatigue and pain. He just gives everything every time he pulls on the shirt," he said. "He is the superstar, but his support for the team is phenomenal." –Reuters