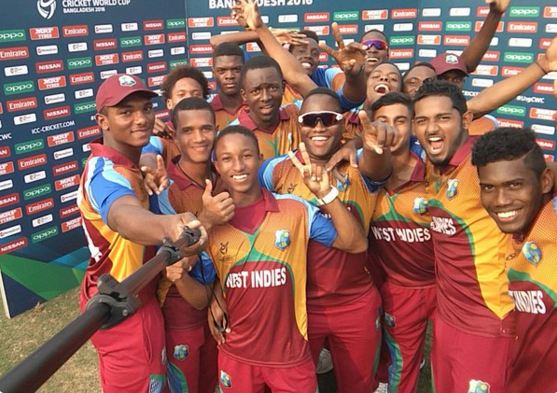 FATULLAH, Bangladesh – Chemar Holder joined the team two nights before West Indies’ ICC Under-19 World Cup 2016 quarter-final clash against Pakistan at the Shaheb Osman Ali Stadium on Monday (February 8), as replacement for the injured Obed McCoy, and was straightaway drafted into the playing XI in place of Odean Smith, reported ICC.

Only a few weeks back, the Barbados-born 17-year-old paceman had bundled Windward Islands out for 66 to help Combined Campuses and Colleges successfully defend 156 in a List A game. Holder lived up to his billing with a quality spell that set the tone for West Indies’ convincing five-wicket win, despite Umair Masood playing the best knock of the tournament.

Holder and Alzarri Joseph reduced Pakistan to 21 for 3 in 8.4 overs before Masood’s counter-attacking 113 from No. 6 took it to 227 for 6. The total, however, was too less on a track that became better to bat on in the later half, as West Indies rode on half-centuries from Tevin Imlach and Shimon Hetmyer, the captain, to finish the game in 40 overs and book its semi-final date against Bangladesh in Mirpur on February 11.

The game started with Joseph and Holder using their height to generate serious pace and bounce, keeping the batsmen in a defensive mode. Having mixed up his lengths intelligently, Holder bowled a short delivery on off-stump that hurried on to Zeeshan Malik, the stand-in captain, who failed to execute a pull shot and was caught at square-leg.

Promoted to No. 3 to see off the first few overs on a misty morning that needed the floodlights to be used, Shadab Khan had no answer to a back-of- length delivery and edged to slip to give Holder his second wicket.

Joseph, who touched the 145 kmph-mark, then trapped Mohammad Umar in front with a sharp yorker.

Shamar Springer and Keemo Paul reaped a wicket each on the back of the softening done by the opening bowlers, who conceded just one boundary in the first ten overs, as Pakistan was reduced to 57 for 5 in 21 overs.

As has been the case throughout the tournament, the fielding team failed to sustain the pressure. Even though Hetmyer kept seven fielders inside the 30-yard circle at times, Masood’s 114-ball effort and his sixth-wicket stand of 164 runs with Salman Fayyaz left West Indies short on options and brought cheer back among the Pakistani fans in the stands.

Barring a half-century against Nepal in a warm-up game, Masood had been out of form for more than five months. With the team in dire need of a hero, he initially focussed on crease occupation, making only 11 off his first 30 balls.

Solid with his footwork against both seamers and spinners, Masood showed the first signs of having got a measure of the situation when he hit three consecutive fours across the 25th and 26th overs. Having reached his half-century off 76 balls, Masood scored his next 50 runs in just 30 balls.

Masood scored just seven runs off 14 balls against Holder and Joseph, but to have played them out and targeted the rest was quite mature. He was particularly severe on Springer and Paul, whom he hit for 61 runs in 45 balls.

Masood, however, alone could not have helped Pakistan make 141 runs in the last 20 overs. If he was at his calculative best, Fayyaz, who remained unbeaten on a 79-ball 58, was a brave soldier, unwilling to give in to the opposition’s designs. 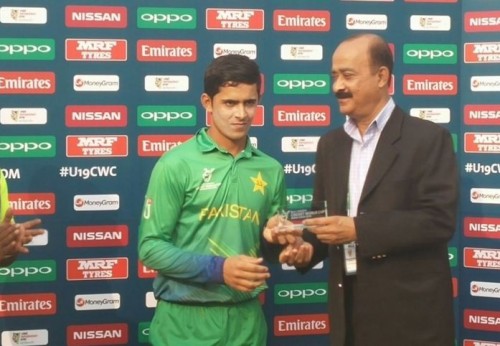 Umair Masood is named as the Man of the Match for his magnificent ton in a losing tie. –ICC[/caption]

The opinion at the break was that the Pakistani spinners would strangle the West Indian batsmen. Probably aware of the ploy, Gidron Pope and Imlach came out all guns blazing, as West Indies put on an opening partnership of 45 runs in 6.2 runs.

Pope perished against the run of play in the second over of spin in the innings, but his two fours and two sixes in 18 balls had given West Indies a solid foundation.

Hetmyer’s 42-ball 52 was the most pleasing part of West Indies’ chase. He showed positive intent with his footwork against the spinners and never allowed any bowler to settle, forcing Pakistan to make many changes.

Hetmyer’s 77-run stand with Imlach ended when was deceived by Shadab’s flight to be stumped in the 20th over. Two smart run outs by Shadab reduced West Indies to 147 for 4, but the batsmen kept playing their shots as Pakistan bowled a lot of short deliveries on a pitch that was no longer as favourable to the bowlers as it had been to Joseph and Holder early in the morning.