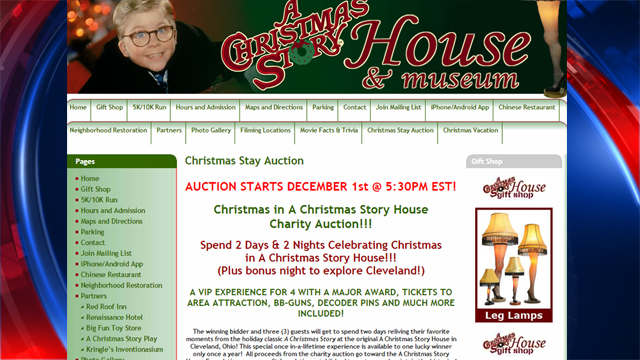 CLEVELAND - Fans of "A Christmas Story" will start the bidding for the chance to celebrate the season by staying in the Cleveland house made famous by the popular 1983 holiday film.

The winning bidder can spend two nights and two days with up to three guests at the 120-year-old house used in exterior shots for the film and whose interior was restored to look like the movie family's home.

The auction on eBay begins on Tuesday night and runs for a week. The winner can stay at the house on Dec. 24 and 25 and at a luxury hotel on Dec. 26.

Among the possibilities are spending Christmas Eve sleeping in the bedroom of the movie's 9-year-old Ralphie Parker, who dreams of getting a Red Ryder air rifle for Christmas. Winners can also bask in the glow of the "major award" the family patriarch wins in the film, a lewd leg lamp his wife unceremoniously dispatches.

Proceeds from the fifth annual auction benefit the Christmas Story House Foundation, which provides grants for restoration and upkeep of homes in the Cleveland neighborhood. Winning bids have ranged from $3,000 to nearly $6,000.

"We've had a variety of people stay here," said Steve Siedlecki, executive director of the Christmas Story House and Museum. "Last year it was a couple. We have had a family of four and once it was just one guy."

The house and museum have film props, costumes, memorabilia and hundreds of behind-the-scenes photographs from the movie based on Jean Shepherd's stories about the northwest Indiana of his youth.

More than 45,000 people visit the house each year, most in the weeks leading up to Christmas, Siedlecki said. -Reuters