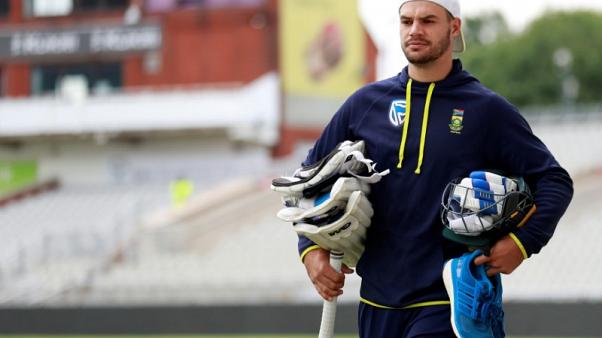 POTCHEFSTROOM (Reuters) - Debutant Aiden Markram suffered a horror run out just three runs shy of a century as South Africa amassed 298 for one on the first day of the first Test against Bangladesh .

Dean Elgar scored his ninth test century and was 128 not out at the close with Hashim Amla unbeaten on 68 as South Africa looked set for a massive first innings score at Senwes Park.

The 22-year-old Markram appeared to be heading for a dream start to his test career before being dismissed on 97 when he was caught out of his crease, backing up too quickly as he attempted to help opening partner Elgar to his century.

Elgar was on 99 and looking for a quick single to get to three figures but after a moment’s hesitation, he decided against a run, leaving Markram halfway up the crease and scrambling unsuccessfully to get back to safety.

The pair put on a 196-run opening partnership as they took advantage of a batsman friendly track.

Bangladesh won the toss and were expected to relish the flat track but captain Mushfiqur Rahim surprisingly elected to bowl, putting his side immediately on the back foot as they went through seven bowlers.

Elgar, 30, went to his century two balls after the run out but was muted in his celebrations, obviously upset after seeing his young partner miss out on the milestone.