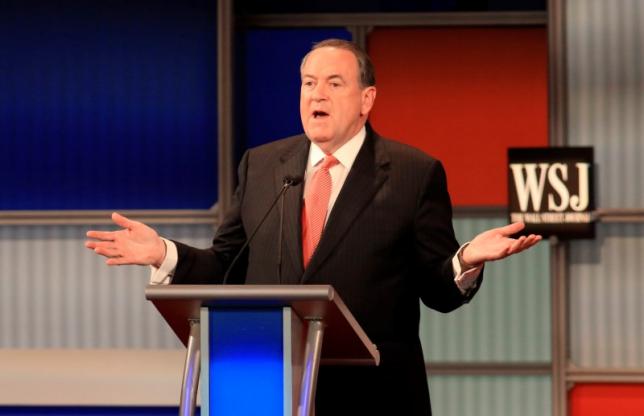 CHICAGO - The co-writer of 1980s hit "Eye of the Tiger" has filed a federal lawsuit against Republican Mike Huckabee's presidential campaign for playing the song at a rally for Kim Davis, the Kentucky county clerk who refused to sign gay marriage licenses. Frank Sullivan, a guitarist and founding member of the band Survivor, sued Huckabee for President for unauthorized public performance of the song. The lawsuit, filed on Wednesday, claims the campaign infringed on Sullivan's copyright, which he holds through his publishing company, Rude Music. Sullivan, who filed the suit in federal court in Illinois, where he lives, asked that Huckabee's campaign be prohibited from unauthorized performances of the song and asked a federal judge to determine damages. The song was played as Huckabee, the conservative former Arkansas governor, escorted Davis out of the Carter County Detention Center, where she had spent six days in jail in September for contempt of court. Davis became a controversial figure after refusing to issue marriage licenses to same-sex couples following a Supreme Court ruling legalizing such unions around the country. Sullivan's suit claims the copyright infringement was willful because he is familiar with copyright laws since Huckabee, who plays bass guitar, has his own band, Capitol Offense, and holds copyrights to his own works. The suit says Huckabee has been sued before by musicians who did not want their songs used by his campaign. Sullivan, who wrote "Eye of the Tiger" with Survivor band mate Jim Peterik, sued Newt Gingrich in 2012 for repeatedly using the song at campaign events. The suit was settled out of court. "Eye of the Tiger" was popularized as the theme song from the 1982 movie "Rocky III" and was nominated for a Grammy. Billboard magazine ranked it No. 24 on its list of greatest Hot 100 songs of all time. -Reuters