Humans may face malnutrition if birds and bees disappear 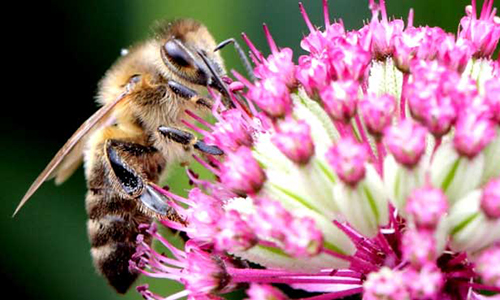 Humans may face malnutrition if birds and bees disappear

LONDON – If all the birds, bugs, bees and other creatures that pollinate our food crops were to disappear from the planet, humans could face a sharp increase in malnutrition, disease and death in many parts of the world, scientists estimate. Researchers analyzed supplies of 224 types of food in 156 countries, quantified the vitamins and nutrients in foods dependent on animal pollinators, and then calculated what nutritional deficits people could face if pollinators ceased to exist. Globally, dietary changes forced by the extinction of pollinators might increase deaths from non-communicable diseases and malnutrition-related problems by about 1.4 million, or a 2.7 percent gain in mortality, the researchers estimate. “It is striking how important animal pollinators are for human health globally,” said senior study author Samuel Myers, an environmental health researcher at Harvard University. While scientists can’t predict with certainty when, if at all, pollinators might become extinct, Myers and colleagues note in a paper in The Lancet that there’s ample evidence of declining populations of certain types of pollinators in many parts of the world. Since 2006, US managed honeybee colonies have seen yearly losses of 30 percent, for example, and there’s been a 15 percent annual die off in European colonies, the authors note. Over 30 years, significant declines in wild pollinator populations have been documented across North America, Asia and Europe, with several species going extinct. The causes aren’t clearly understood but there’s a growing consensus in the scientific community that declining populations of insect pollinators in particular may be happening due to pest infestations, disease, rising pesticide use and loss of habitats, the study team writes. At least some of these changes may be slowed or halted by changes in human activity, such as reductions in pesticide use, Myers told Reuters Health. During pollination, pollen from the stamen, or “male” part of a flower, moves to the stigma, or “female” part, fertilizing it and resulting in the production of fruits and seeds. Some plants can reproduce using wind-blown pollen, while others need insects and animals to transport the pollen. Insects like bees, wasps, moths, butterflies, and beetles are the most common pollinators, but other species such as birds and mammals also transport pollen. Some common non-insect pollinators include hummingbirds, fruit bats, flying foxes, possums, lemurs and geckos. Assuming all of these pollinators disappeared, 71 million people in low-income countries could become newly deficient in vitamin A, and an additional 2.2 billion individuals already getting less than the recommended amount of this nutrient would have further declines in consumption, the researchers estimate. Vitamin A is essential for good vision, a healthy immune system and cell growth. Under the same worst-case scenario, 173 million people would become newly deficient in folate, while an additional 1.2 billion already deficient would become more so. Folate is a type of B vitamin that’s needed for cell growth, metabolism and to help prevent the risk of some birth defects. Total pollinator extinction could also reduce global supplies of fruit by 23 percent, vegetables by 16 percent, and nuts and seeds by 22 percent, the researchers calculate. Wealthier populations would be relatively insulated from food loss, able to afford any price hikes that might accompany increasingly scarce commodities, the researchers predict. Poorer people, meanwhile, would have disproportionately malnourished diets. The research was funded by the Bill and Melinda Gates Foundation and the Winslow Foundation. The authors caution that incomplete or inaccurate data on dietary habits around the world, mainly based on government records of average food consumption, might in turn throw off the accuracy of the estimated impact of pollinators on food supplies and nutrient availability. Even so, as the first study to fully link global declines in animal pollinators to human health, the findings lend new urgency to the issue, Gretchen Daily, an environmental scientist at Stanford University in California, argues in an editorial accompanying the study. “More and more evidence shows the tremendous health value of fresh fruits, veggies, nuts and seeds, so declines in their availability will likely have major health impacts well beyond what vitamin pills could make up for,” Daily said by email. –Reuters