I will get people rid of fake rulers, says PTI chairman Imran Khan 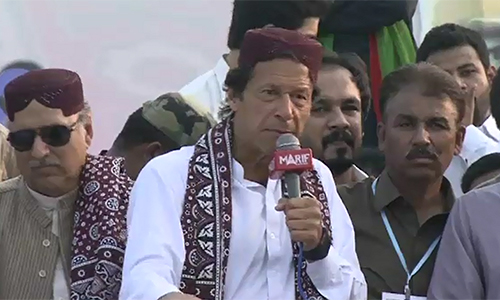 I will get people rid of fake rulers, says PTI chairman Imran Khan

MIRPUR KHAS (92 News) – PTI chairman Imran Khan has said that he will strive for a new Pakistan till he is alive. Addressing workers in Mirpur Khas and Tando Jam on Thursday, he said that the PPP and the PML-N have taken 6/6 turns. “What have they done?” He said that he would get people rid of fake rulers. “A change is must in Sindh. We will free people from pressure,” he said. The PTI chairman said that they would not spend people’s money on Metro and underpasses. Earlier talking to the media at airport, he said that the local bodies system in Sindh is under the chief minister. “I will make it like Khyber Pakhtunkhwa after liberating it from the chief minister,” he said. He was accorded a rousing welcome in Tando Jam.