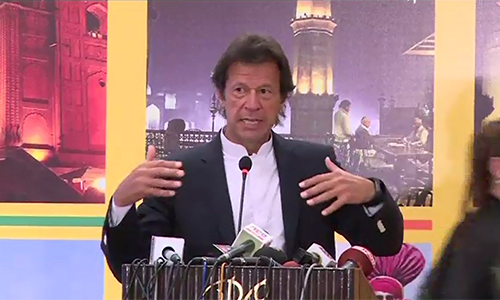 LAHORE (92 News) – PTI chairman Imran Khan has said that a leader is a name for thought and vision, while the country needs leadership.

Addressing the Leadership Conference on Thursday, he said that ideology and struggle are vital for becoming a leader.

“No one can become a leader by displaying the portraits of his mother and grandmother,” he said. “A leader is the person who can face difficult times.”

The PTI chairman questioned that how tax would be collected if the leadership does not pay the tax.

He said that there would be no need for the election campaign in 2018. “There is no independent institution in the country.”

Imran Khan said that Nawaz Sharif had held a secret meeting with Modi in Kathmandu, which meant he could not face the people.

He said that they had commercialized Rest House in Khyber Pakhtunkhwa and spending money on the welfare of the people.

“Up to two billion trees have been planted in Khyber Pakhtunkhwa. We will change the system in hospitals and universities. The local bodies system will also be exemplary,” he maintained.

He said that the people could take care of themselves if they are empowered. “A change is not coming, but has come,” he added.