ISLAMABAD (92 News) – Prime Minister Imran Khan has said on Monday that if the ministers do something wrong then he wants them to be exposed.

In his interview to a group of senior journalists from various TV channels, the minister said that censorship is always discouraged in true democracy as it is used to hide one’s incompetency always. “I always do like that myself and my ministers must be stayed accountable to public,” he said. 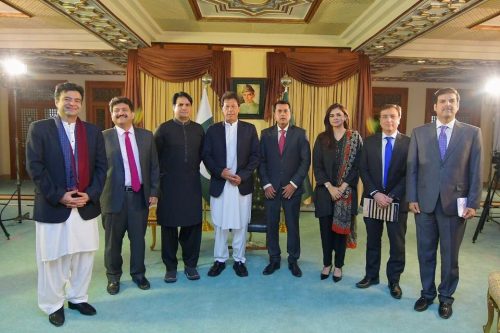 Responding to individuals mocking his poultry, livestock statement, he said that there was a hue and cry over statement related hen and calf, adding “I just wanted to empower the rural women and also share contribution of Pakistan in Halal meet market across the globe.” 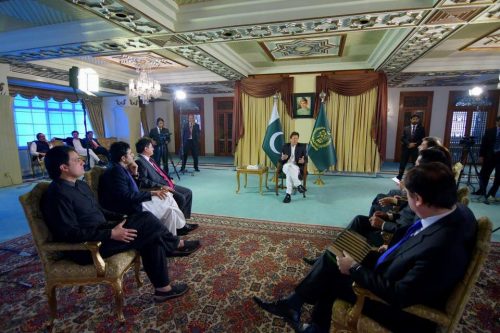 Talking for current account deficit, Imran Khan said the former government left us with the deficit of 19 Billion dollars resulting making people buy the dollars more and more and SOP also played the part deciding to raise the dollar price being an autonomous body.

Commenting on rupee’s devaluation, the PM has said that he found out about last week’s plunge in the value of rupee after watching the news. He also said the decision to drop the value of the currency against the US dollar was taken by the State Bank.

He also said that the State Bank of Pakistan is an autonomous institution, noting various measures the government is taking to this devaluation. “We have instructed SOP to keep us in contacted in case of any important decision regarding dollar price, we are facing real crisis only due to deficit, but I can assure that this is a temporarily crisis that would be met successfully,” he mentioned.

For expressing his views about investment, PM Khan said that multinational companies are coming in Pakistan for investment not loans, investment is the real key to raise for any nation like China did. “We are introducing strict laws over money laundering as well,” he added.

System for the poor, the premier said that he wants to change the system of elitism to the one that supports the underprivileged. “There are better education institutes for elite, good justice system for elites. The rich can afford good lawyers, they can even get away with robbery while the poor can’t get justice in time,” he said.

“I just want to bring the system that would benefit a common man, we shall introduce Health Cards for the poor in Pakistan, trust me that no government in the past has ever met such hard circumstances in the beginning,” he explained. 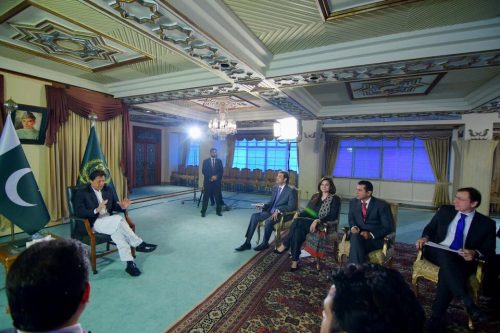 Talking about his 100-day performance, the prime minister clarified that even if a bridge is to be constructed that is not completed in 100 days. He said the first 100 days of a government help ascertain its direction only.

He said all ministers are reporting their progress, future plans and cost cutting for the first 100 days, which he will be reviewing this week. About revamping institutions like railways, PIA, steel mills etc, he said they have studied and are in process of implementing from Singaporean and Malaysian models.

Imran Khan said that the incumbent government is not interfering in any institution, noting that the Interior Ministry is under him, CDA comes under him, yet they are freely issuing reports against his own residence in Bani Gala, which is unprecedented.

To a question related to Punjab Chief Minister Usman Buzdar, the prime minister said that he is the chief executive of a province. If he gets a complaint that someone’s daughter was troubled by the police, then does he not have the right to call the police officer and ask him about it?

On Azam Swati case, PM Khan remarked that the top court has formed a joint investigation team to probe the incident. Action will be taken according to the findings of the team. “Azam Swati will resign if he is proved of any wrongdoing,” the prime minister said. “We may change some ministers too.”

Defending his U-turns statement, PM Khan said, “People always blame me for taking U-turns, I have never denied that and I don’t think of it as a bad thing. What’s wrong in changing the strategy to achieve your goals?”

About foreign visits, Khan said he decided to travel abroad only when he knew the visit would be beneficial for Pakistan’s economy. “Right now everyone abroad is aware that our economy is destroyed. So, my focus is on fixing that before touring abroad.”

The premier further said that France and Germany’s analogy may apply to India and Pakistan because the former two fought many wars. “That doesn’t make Pakistan-India relations same as that of German and France.

“To say that India and Pakistan are same nation and there should be no boundaries between us is inappropriate,” he elaborated. “We are not same nation. We are Quaid e Azam’s true nation.”

On US President Donald Trump’s letter to Prime Minister Imran Khan, he said that Trump had appreciated Pakistan’s role in the war against terrorism. He said that Pakistan will play its all-out role for peace in Afghanistan.

“Apologetic attitude was adopted towards the US in the past.” He said that Trump had expressed best wishes for Pakistan. The PM said that the Pak-US relations are thawing.

Commenting about corruption, the prime minister said the nation must decide whether it is to tolerate corruption or not. “If the answer is yes, then we have no future. Then, just ask yourselves why there is no corruption in developed countries.”

He said now FBR would collect taxes and Ministries of Finance and Commerce will make policies. Prime Minister told a questioner that Pakistan can have no future if the system of corruption is allowed to run. Giving the example of China, he said the country would have become an economic giant as if it had penalized the corrupt elements.

Prime Minister said the bureaucratic reshuffling has been made purely on merit and there was no other motive behind these transfers and postings, as projected by a section of media.

The Prime Minister assured the nation that Pakistan’s economy will improve to a great extent as these policies start giving fruits. Imran Khan on a question regarding the appointment of Chairman Public Accounts Committee said the demand of opposition to appoint Shahbaz Sharif is unrealistic and it will cause embarrassment to the country in the comity of nations. He said it will not be fair to appoint a person as Chairman Public Accounts Committee who is facing multiple corruption charges. He said if agreement is not reached with the opposition, the government will set up its standing committees.

Imran Khan said the opposition has been trying to put the government under pressure from day one. He said the opposition only wants to get an NRO in order to get rid of corruption cases. However, this will not materialize. The Prime Minister said civil-military relations are very good and civil and military leadership is on same page regarding key national issues.

“From Swiss government, we sought data from 5 years ago since many money launderers moved their money from Swiss accounts after the Panama Leaks,” he said.

“One interesting aspect was that the UAE and Saudi Arabia didn’t share data of ‘Iqama (employment contract)’ holders citing that it is equivalent to their citizenship and hence data could not be shared. Now, you will know why Iqamas were sought secretly.”

The prime minister took the moment to tell the public that they would not have deficit anymore. “Good times are ahead. We will recover money and we will have investments,” he said.

To a question regarding his civil-military relationship, the premier termed that the leaders around the world seek the opinion of the military since they are equipped with the means to brief us on security issues.

He said Army Chief Gen Qamar Javed Bajwa is standing steadfastly by the government. “There’s not a single decision that has been taken alone by either of us. All decisions are taken by me and Gen Bajwa stands right beside those decisions,” he said.

Asked about his government’s efforts to address the missing persons’ issue, the prime minister said a meeting had been scheduled between him, Gen Bajwa and Balochistan National Party (BNP-M) president Sardar Akhtar Mengal. However, Mengal could not make it to the meeting, he said.

“But for the record, Gen Bajwa has given me full assurance regarding resolving the missing persons’ issue,” Khan said.