Dr Abdullah Awad Al Juhany arrived in Lahore from Islamabad, however, he expressed best wishes for Pakistan and Pakistani nation.

On the occasion, Pervaiz Elahi thanked Dr Abdullah for paying visit to Lahore and said both Pakistan and Saudi Arabia are bonded in long-term ties. 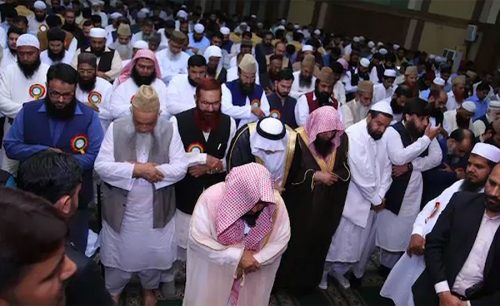 Minister for Religious Affairs Noorul Haq Qadri was also present during the meeting. Imam-e-Kaba said relationships of Pakistan and Saudi Arabia were not merely diplomatic but based on faith.

He said the security of Pakistan and Saudi Arabia is interlined and both countries could not remain cut off from each other.

He added Pakistan was Saudi Arabia’s strength and hearts of two nations beat together. He stressed for frequent exchanges between the two countries in various fields.

According to the Inter-Services Public Relations, Imam-e-Kaaba stressed the need for boosting efforts to enhance peace and harmony in the Muslim world.

During the meeting, Imam-e-Kaaba Sheikh Dr Abdullah Awad Al Juhany said expressed that Pakistan has a momentous place in the Muslim Ummah and appreciated the country’s positive role for regional peace and stability.

The ISPR further said that both the leaders expressed satisfaction over the brotherly relations between Pakistan and Saudi Arabia.