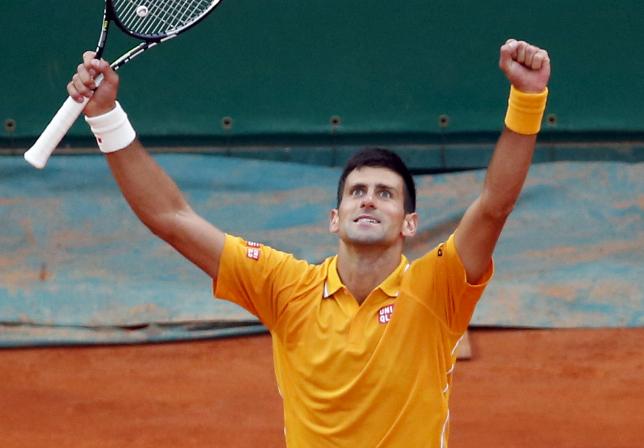 PARIS - Novak Djokovic's already brilliant season took on another dimension on Sunday when the world number one became the first man to win six Masters titles in a calendar year by dismissing Andy Murray 6-2 6-4 in Paris. The Serbian won three of the four grand slam titles -- Australian Open, Wimbledon and U.S. Open -- and has already made sure he will finish 2015 as number one in the ATP rankings. He heads into the Nov. 15-22 World Tour finals in London beaming with confidence, having won his last 22 matches. "I am obviously very proud and very happy to win this title again, it's a great tournament and all the best players in the world were here," Djokovic said at the court side. Djokovic, the first man with four Bercy titles and also the first to win three in succession, was in another league against a sorry Murray, the second seed. The Scot struggled to find his range early on, sending a few shots long and Djokovic broke to love for 2-1. Murray had a few tricks up his sleeve, trying to mix it up with drop shots, but Djokovic had too much poise and pace and he stole his opponent's serve again as he took advantage of some sloppy errors. Murray raised his game in the second set after dropping his serve early on. He went to the net to level for 2-2 and in the sixth game he managed to lead 30-0 on Djokovic's serve. That was as close as he came to an upset as Djokovic won the game and put the Olympic champion on the back foot again in the following game, breaking for 4-3 when Murray sent a forehand long. Djokovic ended a quick final on his first match point when Murray returned wide. Djokovic played in all the Masters finals this season, winning the first three in Indian Wells, Miami and Monte Carlo, then prevailing in Rome and Shanghai. He faltered at the last hurdle in Cincinnati and Montreal, where he was defeated by Murray. He did not take part in the Madrid Masters. -Reuters