MIRPUR (92 News) –Pakistan Tehreek-e-Insaf chairman Imran Khan said that they will make a new Pakistan by getting Barrister Sultan winner in the elections.

Addressing a public meeting in Mirpur on Wednesday, he said that now decisions about Azad Jammu will be made in Azad Kashmir. “The time has come to fight against corruption.”

Imran said that it is first time the election is being investigated in the country.

He said that the PTI will introduce Switzerland-like system in Azad Kashmir.

The PTI chief congratulated each participant of the Islamabad sit-in. “People should get ready as 2015 is the election year,” he said, adding that it is time to rise for rights.

He claimed that the PTI had rejected billions of rupees in the Senate elections in Khyber Pakhtunkhwa.

He said that he had broken the partnership of Nawaz Sharif and Asif Zardari.

Imran Khan said that the time of Altaf Hussain is near.

“Altaf Hussain addresses people from far away and ‘living corpses’ sit in his meeting. People are forcibly brought his meeting,” he added. 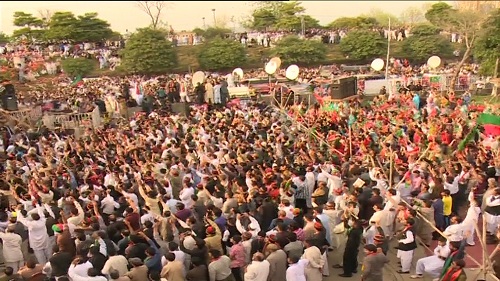