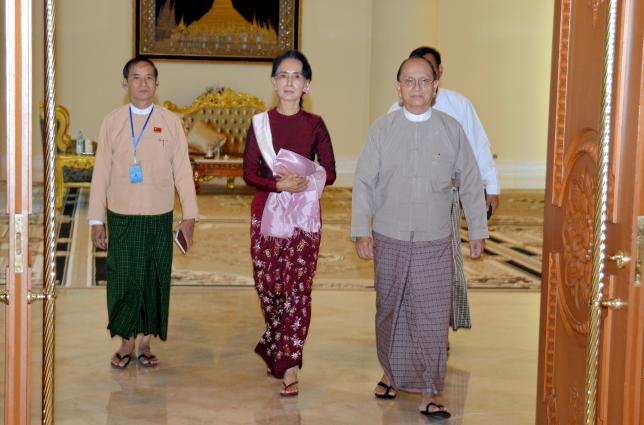 NAYPYITAW - Democracy icon Aung San Suu Kyi held direct talks with Myanmar's top general for the first time on Wednesday as her party prepares to form the government in a country where the military retains considerable clout after decades of rule.

Earlier in the day, the Nobel laureate also held talks with reformist President Thein Sein to discuss the transfer of power to her National League for Democracy (NLD), which swept a Nov. 8 election. But the support of the military will be crucial for the NLD to govern smoothly.

Suu Kyi and armed forces supremo Min Aung Hlaing talked for over an hour at the military chief's office in the capital Naypyitaw. No aides were present.

Sitting in his car before driving away, the general smiled and said: "We had very nice talks".

It was a meeting rich with symbolism - for over two decades, the military persecuted Suu Kyi and the NLD after ignoring a 1990 election victory won by the party. The two sides must now work together - the NLD will form the government but the military runs the interior, defence and border affairs ministries under a constitution drafted before the end of its half-century rule in 2010.

Suu Kyi has not commented on either of the pivotal meetings during the day.

Thein Sein's spokesman and information minister, Ye Htut, said her 45-minute talks with the president, a former general, were centred on the transition.

"We have opened a communication channel," Ye Htut told a news conference.

"They mainly focused on the smooth and peaceful transfer of the state responsibilities to the future government," he said, describing the change to a new president as "completely unprecedented".

Public jitters about possible turbulence in the months ahead have been eased by endorsements of the election win by Thein Sein and Min Aung Hlaing. The new administration is likely to take over around March.

The constitution is likely to be a bone of contention between the military and Suu Kyi, who has been unequivocal in wanting Myanmar to be a fully fledged democracy.

Suu Kyi has faced resistance from the military in attempts to change parts of the constitution, including a clause that bars her from becoming president because her children are foreign citizens.

It is uncertain whether the NLD would risk putting itself on a collision course with the military by launching another push to reduce its political power. It has enough legislative seats reserved under the constitution to veto changes to the constitution.

Though Suu Kyi has taken a more conciliatory tone towards the military since becoming a lawmaker, she took a swipe at Min Aung Hlaing in June, accusing him of influencing military legislators to rebuff changes to the status quo.

After the bloc voted in unison to keep its veto powers, Suu Kyi said: "He's not elected by the people, so why does he have the right to decide?" -Reuters