Incompetents’ taking rein of govt is no less than tragedy: Maryam


BAHAWALPUR (92 News) – Pakistan Muslim League-Nawaz (PML-N) Vice President Maryam Nawaz Sharif on Wednesday said that incompetents’ taking the rein of the government is no less than a tragedy.

Maryam Nawaz visited PML-N leader Balighur Rehman’s house in Bahawalpur and condoled on the death of his wife and son.

Addressing workers after condoling with Balighur Rehman, the PML-N vice president said that the key of country was handed over to the International Monetary Fund (IMF) by Prime Minister Imran Khan and made the feat of nation. 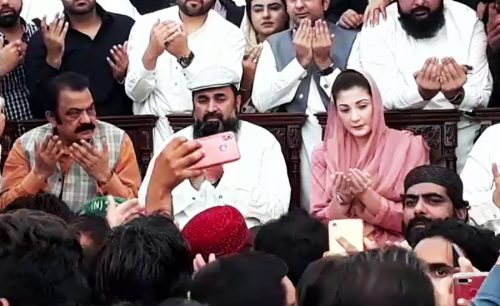 Harshly criticising the incumbent government over rising inflation, Maryam Nawaz mentioned that it has been ten months since the new government assumed power but the country hasn’t heard any good news.

“The gas tariff was pushed up by 140 per cent and prices of other essential commodities were jacked up as well,” she lamented. She said 220 million people are reeling from inflation.

Slamming Prime Minister Imran Khan, she said she called him ‘Nalaiq-e-Azam’ (greatest incompetent). She also claimed that former prime minister Nawaz Sharif brought the country on the path to progress.

The PML-N leader said Imran Khan used to say he would not ask for loans but has been doing so since coming to power. “Imran Khan is going abroad for begging in the name of foreign visits, he said.

Maryam Nawaz termed the death of PPP leader Qamar Zaman Kaira’s son Usman and his friend in a road accident is a big tragedy.

Farishta is daughter of Pakistan

Commenting on the rape and murder of 10-year-old girl, Farishta in Islamabad, the PML-N leader said she was horrified by the incident and denounced the police’s role in the wake of the incident. She said the victim girl is a daughter of Pakistan.

Pakistan Muslim League-N (PML-N) vice president Maryam Nawaz has said that there is no need of any movement against the incumbent government; it will topple itself.

She said in a statement before attending her party’s session in the parliament on Monday. Crticizing on the PTI-led government, Maryam Nawaz said that the government is its own enemy and will topple itself.

The PML-N vice president termed that Prime Minister Imran Khan has nothing to speak except of lies. She also mentioned that only the supremacy of the democracy and the parliament can run the country.