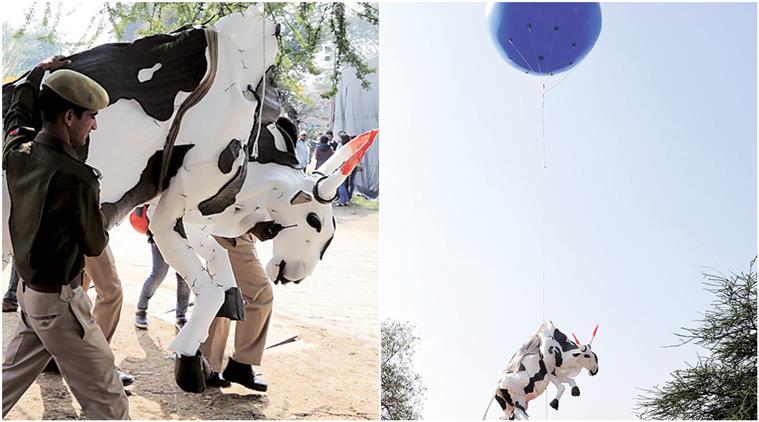 JAIPUR (92 News) – In a strange yet shocking incident, a piece of art displayed at the Jaipur Art Summit, meant to spread awareness about saving cows from plastic consumption, created a furor leading to the detention of two artists. The event was hosted by the Jawahar Kala Kendra, a centre of cultural and artistic activities. Artist Siddhartha Kararwal who created the installation called 'Bovine Divine' had put up a Styrofoam cow suspended mid-air by a balloon. He said that the aim was to show “how cows consume plastic and die due to its consumption”. However within 30 minutes of the work being put up for the show, police came and asked them to take down the artwork immediately, even before the show began. Artists Chintan Upadhyay and Anish Ahluwalia tried to reason with the police but the conversation turned into an argument. They both were taken to Bajaj Nagar police station and detained for at least three hours. The Rajasthan government removed a Station House Officer (SHO) and a constable for alleged dereliction of duty and not tackling the situation properly. "SHO of Bajaj Nagar Police station, Mahendra Gupta, and constable Sumer Singh have been sent to police lines for dereliction of duty and not tackling the situation properly," Jaipur Police Commissioner JS Rao said.